Alice in Wonderland, on its surface, is about a girl who falls asleep and dreams of a fantastical world in which she gets lost. However, the pages drip with a symbolism that's waiting to be discovered. With that said, there isn't a lot of agreement among scholars as to what exactly that symbolism is, and what it means.

One common idea in the book is that it is a journey of a girl losing her childhood innocence and naivete. She starts the tale never questioning the improbabilities that present themselves in Wonderland and ends the book pointing out to the entire court that they are powerless and simply a pack of cards. As soon as she recognizes the fantastical and improbable nature of the world around her, she wakes up from her dream.

Some scholars have suggested Alice in Wonderland is a classic allegory where Wonderland is England, and the Queen of Hearts is the tyrant on the throne. Experts point to how violent the Queen and Duchess are, and how warped a sense of justice they seem to have as evidence for this idea. At the time of this writing, England was certainly reflective of a terrorizing and tyrannical government.

Another often cited possibility for the story is that it is a parable on colonization and the calamity that comes from going to a foreign land and imposing one's values. Many point to the fact that when Alice enters the foreign place of Wonderland, she doesn't understand and rather than choosing to live and learn the natives' ways, she applies her own values to the situation. This decision nearly has disastrous results. 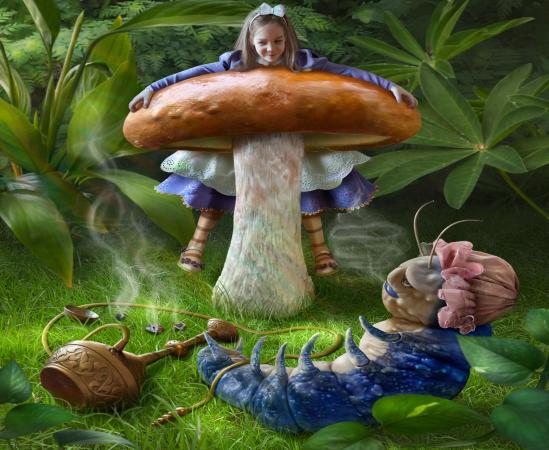 Over the years, many people have thought there are several allusions to drugs and drug use. There's the trippy Cheshire Cat and the caterpillar, not to mention Alice's whole adventure being like a giant hallucination. Consequently, people have questioned whether Carroll, himself, was on drugs and perhaps this whole story was the tale of one of his 'trips.' According to the British Broadcasting Company, however, experts tend to think Carroll was not a recreational drug user, and thus Alice and her hallucinogenic tale are merely figments of the imagination.

While a theme or a motif in literature isn't exactly a 'hidden meaning,' many students struggle to find the themes within a book. While the themes in any given piece of literature can be debatable, most scholars agree Alice in Wonderland at least touches on several themes having to do with childhood, curiosity, and abandonment.

A Wealth of Interpretation

One reason Alice in Wonderland has withstood the test of time is because people still debate about what it means. There are a variety of interpretations of this classic children's novel. Was it merely a lot of imaginative storytelling, or are there deeper, hidden meanings? While no one will ever know for sure, literary scholars are sure to debate about it for years to come.