Shel Silverstein has written hundreds of poems during his career. He is known best for silly rhymes and hilarious imagery. In addition, his poetry contains many examples of alliteration - a literary device where the author uses words next to each other that begin with the same sound.

What do you do if there's a polar bear in your refrigerator? Apparently nothing but come up with delightful rhymes! Bear in There is ripe with alliteration including the lines:

Mari-Lou was a little girl with an apparent affection for swings. You can hear the beginning consonant sounds with the very first line of the poem: "The swing swang..." You'll also find examples in these lines: 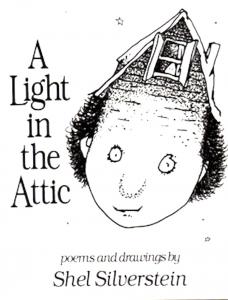 A Light in the Attic

This poem plays on a lot of quasi-made-up words to offer a delightful rendering of many similar sounds. Poemsicle features several silly alliterations right in the middle of the poem:

Even the title features similar sounds in this poem about the dreamt up possibilities of a found object. Some examples of alliteration in Picture Puzzle Piece, aside from the repeated refrain of 'picture puzzle piece,' include:

Rotten Convention sounds like a convention that Oscar the Grouch would love to attend. These are a few examples of alliteration in this poem that just slip off the tongue:

Some naughty behavior lends itself to some silly alliteration in this Silverstein poem that ends with a slightly odd twist! Alliteration is sprinkled throughout the rhyming schemes of Spoiled Brat:

Almost this entire poem is alliteration. The first few lines set the tone:

Elementary classroom teachers often do units or projects on poetry. Alliteration is often discussed during these units and Shel Silverstein poems are a wonderful teaching tool. If you are looking for some specific alliteration lessons involving Silverstein poems, try the following:

Teachers may want to use Silverstein books to teach alliteration in other ways.

A Treasure Trove of Similar Sounds

Whether your goal is to teach the literary device of alliteration or to teach poetry and its mechanisms, you can't go wrong using Shel Silverstein. His silly prose keeps kids engaged, and he uses concrete examples of alliteration so it's easy to understand. He was such a prolific writer, there is a treasure trove of things waiting to be discovered.