Diary of a Wimpy Kid is a popular book series for kids, written by Jeff Kinney, that has spawned several box office hits with readers. The fun books, written in an easy-going style as title character Greg Heffley's personal journal, are good choices if you want to get kids excited about reading. The series made National Public Radio's list of top 100 picks for kids ages 9-14 in 2013.

Diary of a Wimpy Kid books come in two forms - the original series plus a couple of companion books for additional adventures with Greg and his friends and family.

Eight titles are currently in the Wimpy Kid series, with a ninth slated to debut in November 2014. Each book is published like an actual diary, with text that looks like handwriting and stick figure sketches as illustrations. 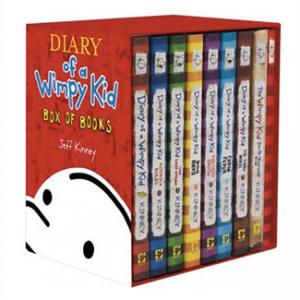 Kinney wrote a companion book, The Wimpy Kid Do-It-Yourself Book, a journal that allows kids to express their own thoughts and feelings, with guidance from the author, similar to main character Greg. The Wimpy Kid Movie Diary: How Greg Heffley Went Hollywood, takes children behind the scenes of the three popular movies. A school planner is also available for order. Additional merchandise, like games, shirts, figurines, and more can also be purchased for die-hard fans of the books.

The series has created quite a stir since the first book debuted. Notable acclaims for the titles include:

Three of the books have been made into movies. All three movies starred Zachary Gordon as title character Greg and followed the plot lines of the books of the same name. Movies made include Diary of a Wimpy Kid, Rodrick Rules, and Dog Days. The combined box office totals for the three movies is over $165,000,000.

Author of the series Jeff Kinney came up with the Wimpy Kid idea in 1998, although the first book wasn't published until 2007. He attended the University of Maryland and first published his ideas for the series on Funbrain.com before turning them into the first book. He originally wanted to be a cartoonist. Today he is married and lives in Massachusetts with his wife and children.

Readers often want to know whether Diary of a Wimpy Kid was based on author Jeff Kinney's real life experience. In an interview with The Guardian in 2012, Kinney said that "in a way, all the experiences are somehow related to my own childhood and I would say that the DNA of my childhood appears in these books." Although a middle child like the character Greg, Kinney did not mention any specific scenes directly inspired from his childhood that made it into the books.

Once you've read all the books and seen the movies, it's fun to test your knowledge by taking a Diary of a Wimpy Kid trivia quiz to see how much you know about Greg, his family, his friends, and his adventures.