If you're working on building a comprehensive library for your child, don't forget to purchase a collection of famous fairy tales for your bookshelf. Fairy tales are timeless and take children on wonderful, imaginative adventures.

Boys and girls alike love tales of princes and princesses, spunky characters and heroes and heroines who accomplish great things. 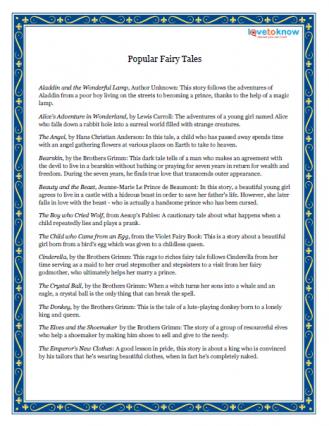 If you're looking for the perfect collection of fairy tales for your child's library, here are a few Amazon.com selections you may wish to consider:

The Appeal of Fairy Tales

Why are fairy tales a good choice for story time?

Fairy tales are beloved by the young and young at heart. Their popularity has stood the test of time and shows no sign of slowing. Although it can be argued that some fairy tales are dark, many are beautiful and full of hope. Fairy tale characters persevere through almost impossible adversity until they find true love or justice is served, making them timeless treasures that teach valuable lessons.