Alien stories have a way of capturing the imagination; these types of stories abound in both fiction and nonfiction genres. The following stories were written specifically for LoveToKnow.com, by author Michele Meleen. You can read these stories online or print them to read later. Click on the story to open it as a PDF and print it. If you need help, check out this guide for Adobe printables.

How to Fix Your Spaceship

How to Fix Your Spaceship is a short story containing just under 700 words. Written for young aliens, this quirky guide explains several ways to try fixing a spaceship after a crash. Children of all ages can enjoy this humorous story, but those in second grade and up will be better equipped to read it independently. 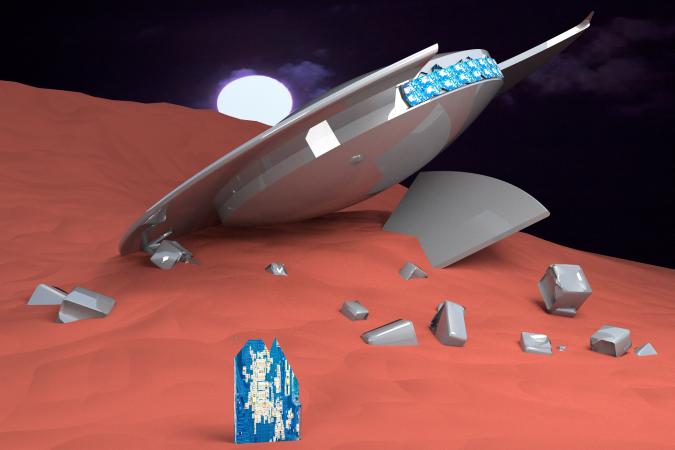 What was that? Something just hit my ship. It must have been a meteor from that meteor shower I accidentally flew through. I knew I should have paid more attention in Spaceship Operations class. Oh, no! There's smoke coming out of the back. The steering wheel's not working. I'm going to crash!

Yup, I definitely crashed. I don't even know where I am. What am I going to do? Mom's going to be so mad.

Wait, I do remember one thing from class! There's a Galactic Guide in here somewhere. Here it is! How to Fix Your Spaceship After a Crash Landing. It says, "If you happen to be a young alien who crashed your spaceship accidentally, and you own this handy guide, you are in luck! Follow these 10 simple steps to get yourself soaring into space again - and out of trouble with Mom."

The first step is to unbuckle my seatbelt and check for injuries. "If there are any injuries, please refer to the guide How To Fix Your Body After A Crash Landing." I don't seem to be oozing, and I still have all six legs, three arms, four eyes and two antennae. Whew! I'm fine.

Okay, the next step says, "Repeatedly press the 'Start' button with all of your eyes closed." Let's give it a try.

Drat! It's not working. I guess it's time to move on to step three. "Abandon ship and find a friendly native to give the ship a shove while you repeat step two. (Tip: You can tell a native is friendly if it is not shooting at you or trying to eat you.)" This guide is crazy! I can't go out there; I don't even know what sort of creatures live on this planet. What if they try to eat me? I think I'll just skip this step.

Okay, the next one says, "Using whatever mode of transportation your body is equipped for, walk, crawl, slither or hover around the outside of the ship to look for damage." Yeah right, I am not getting out of this spaceship! I guess I can skip steps five and six since they require going outside too.

Step seven really isn't helpful at all: "If your ship was built before humans discovered aliens, give up and hitch a ride home." It's good advice, but who even flies a spaceship that old anymore?

Okay, now here's a step I can work with: "Sit in front of the ship and discuss the problem with the machine. Open-ended questions may be helpful." I ask the ship how it is feeling, but there's no answer; that can't be good. What am I supposed to do now?

Step nine says, "If your ship does not respond, resort to yelling while waving all your appendages." It says all appendages, so that makes a total of nine for me. I'll just lay on my back and start waving them all.

If All Else Fails

I'm exhausted! Five minutes of waving all my arms and legs and still no help. There's only one step left, I really hope it works. "If all else fails, give the ship a little kick. This works especially well if you have 12 or more feet."

Onto the Next Problem

Hooray! It worked! Now, if I could only figure out how to hide the damage from Mom. I wonder if there's a Galactic Guide for that? I should check the library of Galactic Guides right here in the cockpit:

How To Distinguish Food From Filth - don't need this one.

How To Speak Fluently In Any Language. Nope.

How To Hide Spaceship Damage From Your Parents. I knew it! Time to get to work. 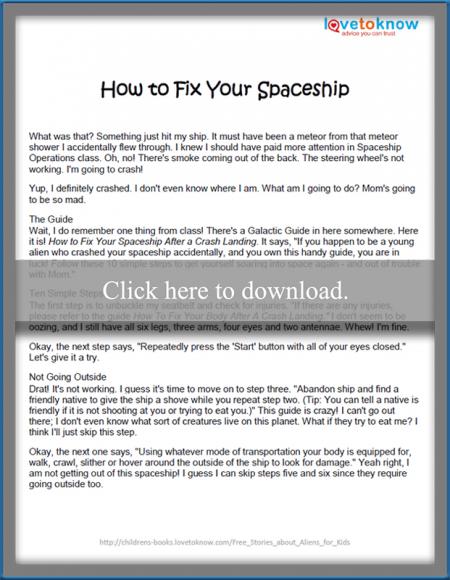 How to Fix Your Spaceship printable

The Adventures of the Bored Galltians

The Adventures of the Bored Galltians is a short story of nearly 600 words about generations of aliens who have grown tired of their village and how they each reacted to that boredom. Due to some inventive language, the story is intended for upper elementary readers. However, younger children will enjoy the story if you read it out loud.

One day, many years ago, a young Galltian named Coura was unhappy with life in the Village of Gah.

"Galltians are so boring," he thought. "They do the same thing every day."

So, Coura decided to leave his village and start a new colony on the other side of the planet. He walked to the west and was never seen again.

Many years later a young Galltian named Gump was bored with life in the Village of Gah.

"Galltians are really boring," he thought. "They do the same thing every day."

So, Gump left his village to start a new, less boring village. He walked to the north and was never seen again.

One day many years later still, a young Galltian named Crag grew tired of doing the same things every day. This was the way of life in the Village of Gah.

"Galltians are too boring," she thought. "They do the same thing every day."

So, Crag chose to leave her village in search of a more adventurous life. She walked to the east and was never seen again.

Today, a young Galltian named Gull felt no passion for life. In the Village of Gah, every Galltian did the same things every day. Each was given a job and expected to follow the outlined steps for that job day after day. Gull decided to journey around the planet to find a more exciting life.

The Village of Cah 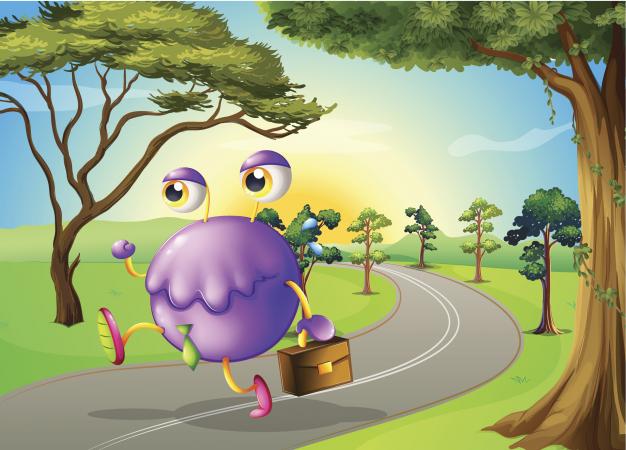 Gull walked to the west and came upon a small village. There were a few small pod houses, each different from the others. Gull was excited because this village looked far more interesting than Gah. He quickly located the village leader, a Cahtian named Coura.

"This is the Village of Cah; you are welcome to stay if you'll kindly agree to do something different each day. This is the way of our colony."

Cah sounded like a lovely place to live, but Gull wasn't interested in a new home, just a grand adventure. Before Gull could leave, Coura made him promise never to tell anyone about this new village. "We do not like visitors," said Coura.

The Village of Gum

Gull walked to the north and came upon another small village. This one was filled with many large huts. This village also looked much more interesting than Gah. He quickly located the village leader, a Gumtian named Gump.

"Welcome to the Village of Gum. Please kindly pass through as we have no more room for settlers." Gull was polite and left right away.

The Village of Cra

Gull walked to the east and came upon a large village. There were stacks and stacks of homes carved into towering mountains. This village looked like the most interesting place he would ever see. Gull quickly located the village leader, a Cratian named Crag.

"As you can see, we have plenty of room here in the Village of Cra. Stay the night or stay awhile, you are welcome here anytime," said Crag.

Crag seemed like an exciting place to live, but Gull was missing his home. Feeling fulfilled by his journey, Gull walked back to the Village of Gah.

Upon his return, all the Galltians gathered to hear Gull's adventurous tales. Gull stayed true to his promise and did not tell of the villages he discovered. He told tales of spaceship wrecks, out-of-this-world creatures, and lagoons filled with bubbling hot lava.

Now, whenever a Galltian gets bored with life, he follows Gull's trail on a grand adventure before returning home. 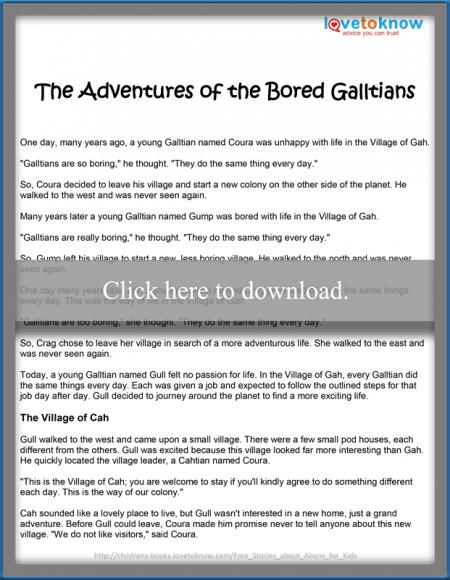 The Adventures of the Bored Galltians printable

Where to Find Alien Stories

Stories about outer space, space travel, planets and aliens are abundant online and in print. Finding fictional stories or nonfiction accounts can be easy for any reading level. A few fun stories to check out include:

Out of This World

For generations, alien stories have fascinated children and adults alike. The mysterious nature of these could-be-real creatures makes these tales exciting for all ages. Curl up on the sofa with a good cup of hot cocoa and immerse yourself in another world.