Pirate stories are full of adventure which can be appealing to kids of all ages. Adults can read these stories to a child, or older children can read them individually. Note: the following stories are original stories written by the author, Michele Meleen. They are also available as printables. If you need help with the printables, see this guide.

Captain Silverhook's Symbol of Strength is a 600-word short story suitable for children of all ages. Kids in second grade or higher may be able to read the story independently. The story is about a pirate with a problem to solve. Captain Silverhook's nautical figurehead (the shape carved on the front of his ship) has been destroyed, and he must come up with a new design before he loses the respect of the other pirates. 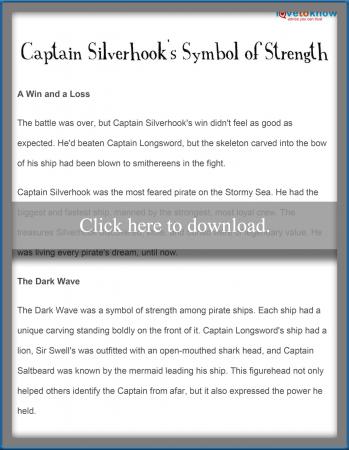 A Win and a Loss

The battle was over, but Captain Silverhook's win didn't feel as good as expected. He'd beaten Captain Longsword, but the skeleton carved into the bow of his ship had been blown to smitherines in the fight.

Captain Silverhook was the most feared pirate on the Stormy Sea. He had the biggest and fastest ship, manned by the strongest, most loyal crew. The treasures Silverhook discovered, stole, and buried were of legendary value. He was living every pirate's dream, until now.

The Dark Wave was a symbol of strength among pirate ships. Each ship had a unique carving standing boldly on the front of it. Captain Longsword's ship had a lion, Sir Swell's was outfitted with an open-mouthed shark head, and Captain Saltbeard was known by the mermaid leading his ship. This figurehead not only helped others identify the Captain from afar, but it also expressed the power he held.

The nautical figurehead was known by all in the sea for two reasons: that skeleton figurehead and Captain Silverhook. There was no doubt the ship was sturdy and powerful, but unbeknownst to the other pirates, it wasn't the best ship ever made. Now, in her damaged condition, the Dark Wave threatened to be the downfall of her Captain.

It would seem to an outsider that Captain Silverhook could simply get a new skeleton and attach it to the ship. However, the Captain knew that would be a grave mistake. The skeleton had been destroyed in battle - a fact Captain Longsword was sure to tell every pirate he encountered. If Silverhook replaced the skeleton, it would look like he was trying to cover up the fight rather than boast about his win. Indeed, the skeleton could no longer show the strength of the Dark Wave.

The Search Is On 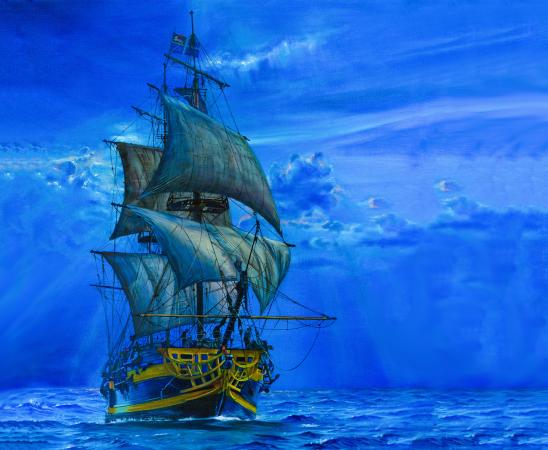 Captain Silverhook would have to find a new figurehead and fast. As soon as word of her weakened state spread, other pirate Captains would be looking to seize the opportunity to challenge the Dark Wave. If Captain Silverhook didn't come up with a new figurehead soon, he would lose credibility, respect, and his treasures! A pirate's journeys were full of wild, mysterious creatures and dangerous sailing conditions. Surely, there must be one thing left that all sailors fear to be used as his new figurehead.

Silverhook wasted no time. First, he asked his crew for ideas.

"Yeah, they got that awful sting and they clog up the straights," added Smith.

"Jellyfish ain't terrifying. What we need is a lightning bolt," said Biggs.

Captain Silverhook laughed at his crew's ridiculous ideas. None of them were nearly frightening enough. Back in his cabin, Silverhook stared out the porthole. The skies were unusually clear, and the waters abandoned of sea life. He was searching for an idea, but Mother Nature didn't appear to want any involvement in giving him one.

After scouring the weapons, barracks, and sights from the crow's nest, Captain Silverhook grew frustrated. He threw himself down on a barrel near the edge of the ship. A few small waves slapped against the side of the Dark Wave. That was it!

When a storm blows in, any Captain will get nervous, even if he'd never admit it. There is an uncertainty in the way of the water. It can creep up and overtake you or soak in slowly to rot a ship from the inside out. Yes, what could be more feared than a dark wave? So, the ship Captain Silverhook so strongly named would now have a figurehead to match. All pirates feared the waters of the sea, and now they had Captain Silverhook's waves of wood to be wary of him as well.

At roughly 800 words, A Pirate's Choice is a short story that could be read to children as young as five or read alone by children in third to fifth grade. The story features a ten-year-old girl who finds herself in the unexpected position of choosing whether or not to be a pirate. 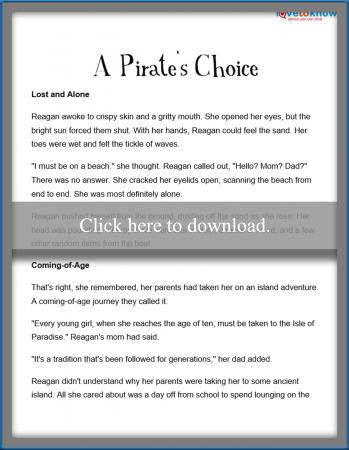 Reagan awoke to crispy skin and a gritty mouth. She opened her eyes, but the bright sun forced them shut. With her hands, Reagan could feel the sand. Her toes were wet and felt the tickle of waves.

"I must be on a beach." she thought. Reagan called out, "Hello? Mom? Dad?" There was no answer. She cracked her eyelids open, scanning the beach from end to end. She was most definitely alone.

Reagan pushed herself from the ground, dusting off the sand as she rose. Her head was pounding. Nearby there were bits of cloth, chunks of wood, and a few other random items from the boat.

That's right, she remembered, her parents had taken her on an island adventure. A coming-of-age journey they called it.

"Every young girl, when she reaches the age of ten, must be taken to the Isle of Paradise." Reagan's mom had said.

"It's a tradition that's been followed for generations," her dad added.

Reagan didn't understand why her parents were taking her to some ancient island. All she cared about was a day off from school to spend lounging on the beach. Now here she was, lying on a beach. It wasn't exactly as relaxing as she'd hoped.

Suddenly, Reagan heard a rustling sound. The bushes near the edge of the sand were shaking, but there was no breeze. Something was moving toward her, but what? 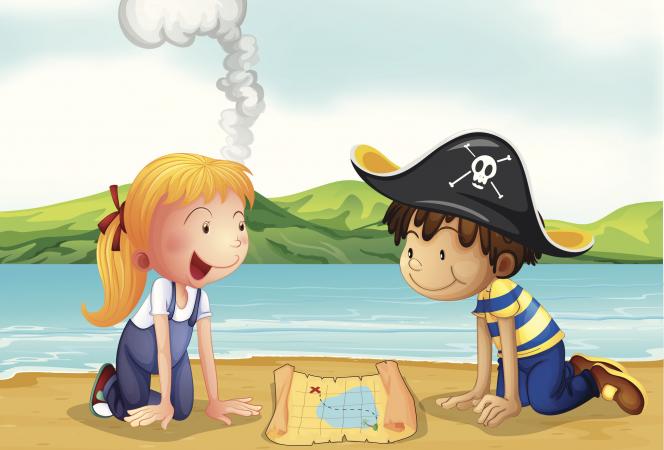 It wasn't a what after all, but a who. A young boy with hair past his shoulders and skin the color of toasted marshmallows rolled across the sand before standing up. His suddenly red cheeks gave away his embarrassment.

"Hi. I'm Jake." The boy walked closer to Reagan as he spoke. She didn't say a word.

"Sorry if I scared you. I tripped on a coconut coming down the path." Jake stared awkwardly at Reagan.

"I'm not going to hurt you if that's what you're worried about. The Council sent me over." He reached out and patted Reagan on the shoulder.

"Council? What Council? Where am I and where are my parents?" Reagan demanded answers with one hand on each hip.

"The Pirate Council of course. This is the Isle of Paradise; your parents brought you here to make your choice." Jake turned toward the bushes, motioning for Reagan to follow.

Reagan hesitated. This strange boy was talking about pirates and trying to lead her into the jungle. It didn't seem safe, or real for that matter.

"What choice have you got?" Jake called, eating the flesh of a coconut he had cracked open.

He had a point. "I'm lost, thirsty, hungry, overheated, and very likely dreaming. What do I have to lose," she thought. Reagan walked with her head held high toward the tree-line. Jake gave her some coconut. They walked in silence for several minutes. Reagan wanted to ask questions; she just couldn't decide which to ask first.

There was a clearing in the trees ahead. Reagan could see a small group of people who looked much like Jake, only bigger. Jake led her to a seat in front of the other pirates.

"Welcome, young Reagan. Today is your Choosing Day," said a woman with braided hair held down under a brown tricorn hat.

"I'm sorry, but I don't know what that means," Reagan answered.

A man with a great white beard spoke up, "Every pirate gets a choice in whether or not to be a pirate. We don't go forcing it on anyone."

"But, where are my parents? And, why didn't they tell me about this?" Reagan stammered.

"Your parents know you're here, that's all you be needin' to know." yelled a man with a curly black mustache.

The woman with braided hair quickly added, "Your parents chose not to be pirates, but as part of our Code, they must give you a choice. They aren't allowed to sway you one way or another or else they forfeit their choice."

Reagan had no clue what to do. She started to cry. The group of pirates sat and stared at her in disbelief. After a few minutes, her mom jumped out from behind a tree and pulled Reagan into a hug.

"You can choose whatever you like, we love you either way." her mom said.

Reagan looked to the Pirate Council. They were visibly angry. "Make your choice, child," they yelled in unison.

"I choose, I choose, not to choose! I'm only ten you know. How am I supposed to make a choice like this?" Reagan yelled back.

The Council members looked at each other with questioning eyes. There was a long silence. "Ain't no one ever chose that before, matey." said the curly mustache pirate. "I say, good enough for me. See you in ten years." Then he walked back into the jungle. The rest of the Council members shrugged their shoulders and followed him.

Pirates are a popular subject in literature for children. There are many places online to find children's stories that can be read or downloaded.

From fiction to nonfiction and younger readers to adults, there is no shortage of stories about pirates.

Children love pirate stories because of the magic and mystery surrounding these scenarios that bare just a little resemblence to truth. Reading a story about pirates can give children the imagination and desire to embark on adventures and brave the wild world.

Comments
© 2006-2021 LoveToKnow, Corp., except where otherwise noted. All Rights Reserved.
Free Stories About Pirates for Kids