Fairy tales capture the imagination of children and adults. The magical worlds filled with impossible creatures and people are exciting to read and often feature a life lesson. Short fairy tales make great bedtime stories or quick reads for beginners. Whether choosing new, original stories or popular classics, fairy tales can entertain any child. Both stories below are original and written by the author, Michele Meleen. 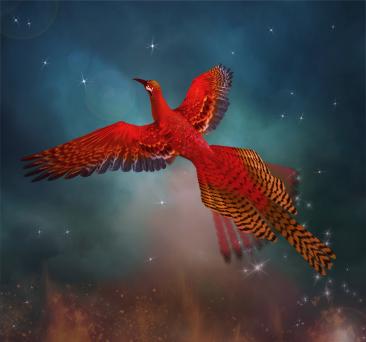 The Last Phoenix is a short story of under 800 words about a magical bird in search of his true identity. With the help of a friend and some soul-searching, Lightcatcher is able to find his purpose in life. This story is suitable for kids of all ages and can be read independently by early readers.

Rising From the Ashes

A tiny red and orange bird rose up out of a pile of ashes. He looked around as far as his eyes could see. Several other piles of ashes lay empty nearby, but there were no other birds. The flatlands were covered in small rocks to the North, East, and West. To the South, there was a winding river in the distance.

All alone, hungry, and nervous the little bird waddled off toward the water. After a long while of walking, he decided to try flying. His enormous wings spread out far beyond his body. A little lift from the wind and he was gliding for short periods just above the ground before dropping to his feet. Eventually, the little bird took flight and made it to the river as the sun was falling below the horizon. His feathers began to sparkle as the light faded from the sky.

As he drank from the river's edge, a small blue and white bird landed next to him.

"I don't have a name," the little red and orange bird whispered back.

"What! No name? Everyone has a name. What's your mom call you?" asked Indigo.

"I don't have a mom," the little red and orange bird said.

"Oh," said Indigo, "Well, that means you just haven't found your name yet then. I can help, I'm good at finding things," said Indigo

"It might be hard to find," said the little red and orange bird. "I don't even know what kind of bird I am."

Legend of the Phoenix

"It's true I've never seen another bird that looks you, but I've heard stories. My mother told us a story about the Phoenix, a red and orange bird with great big wings that sparkle in the night. She said the Phoenix is a protector who would keep us all safe in the darkness," said Indigo

"That sounds glorious. But, I can't be a Phoenix I don't know how to protect anyone."

"Usually my mom teaches me how to do things like fly, fish, and build a nest. But, since you don't have a mom, maybe someone else in your family can help?" replied Indigo.

"I don't have a family. I was born all alone in a pile of ashes," said the Phoenix.

"I know! You must be the last one, the last Phoenix. Cool," Indigo said.

The little red and orange bird didn't want to be the last Phoenix. He would have to spend his life all alone trying to learn to be a protector. He was sure he'd never fit in anywhere. He was much too big to live with Indigo but much too small to live by himself.

Indigo found a large hole in a nearby tree for the last Phoenix to sleep. She helped him find food and practice flying. Indigo even stayed up late into the night keeping the little red and orange bird company while his wings sparkled in the dark. She also tried to give him a name, but nothing stuck not even Shimmer, Flamethrower, or Night Guardian.

The last Phoenix was happy to have such a good friend, but he still felt alone sometimes, especially when Indigo and her family slept. He decided to go back to where he was born and look for his family.

The rock field was empty except for what was left of the ash piles. He lay down on the ash pile from which he came. Before drifting to sleep, a glistening bird that looked to be on fire hovered overhead.

"Do not be afraid, Lightcatcher, you are not the last of our kind. When your job is done, and your sparkle begins to dull, come back home and be reborn. That is the way of the Phoenix. You may be the only one of your kind, but you will never be the last," the voice that spoke sounded much further away than the shimmering figure.

Lightcatcher awoke with a start. Had he been dreaming? He decided it didn't matter. He knew exactly who he was and why he had found Indigo and the other birds. He had a job to do. Lightcatcher flew back to the river and woke Indigo.

"I am a Phoenix, but not the last, and my name is Lightcatcher," he said. 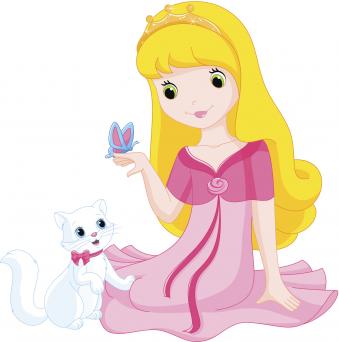 When a lazy princess discovers her favorite cat can grant wishes, she must decide what is truly important in life. Peace for Princess Piper runs around 850 words and contains content suitable for kids of any age. Children reading independently at any level should be able to read this short story.

The Life of a Princess

Princess Piper Paxton lived in a beautiful stone castle with her mother, Queen Clarabelle, her father, King Lucian, and a herd of royal cats. As a child, the Princess believed in magic and played with imaginary friends. She had no chores, did only the schoolwork she enjoyed, and mostly spent time alone with her cats.

Over the years, her parents slowly began to require more and more time and more and more work from Piper. They said one day she would run the kingdom, so it was important that she begin to learn the job of a royal leader.

Piper did not like work; it was hard and boring. She also didn't like the village in which she lived, Starsdale. The people were all angry or sad most of the time - probably because they worked too much. One day, her father asked the princess to venture into the forest and follow a map to learn the boundaries of their land. She was to go alone so he would know she did the work herself.

Piper was not happy about this task. She hated walking, and since she was old enough to know magic wasn't real, she couldn't have fun by herself anymore. Piper decided to bring her favorite cat, Puma, along for the walk.

As they made their way deep into the forest, Puma ran off the path and into some thick bushes. Piper ran after him, fearing she might lose her dearest friend if she didn't. She ducked beneath low branches, crawled through thorn bushes, and came into a clearing. After examining her now torn, dirty dress, Piper looked up at the sparkling cave in front of her. She caught sight of Puma's tail disappearing into the darkness.

Piper ran into the cave then stopped suddenly. A brightly glowing light lit up the whole room. A few feet ahead stood a small figure that looked like a cat but was standing on only two legs. The creature turned and walked into the light. It was Puma! Piper slumped down to the ground in shock.

"How are you doing that?" Piper asked.

Piper was frightened and excited all at the same time.

"I knew you still believed in magic, somewhere in your heart," said Puma. "I am a wish cat. For you my dear friend, I would like to grant one wish."

"One wish! How could I possibly choose just one?" Princess Piper shouted.

"One is all I am allowed, isn't it enough that I can give you even one?" Puma answered.

"I guess. But, I don't want to do work ever again nor do I want to live in this dreadful village. How will I choose?" Piper talked aloud to herself.

Puma waited quietly while the princess thought. "Have you decided?" he finally asked.

"Yes. I wish to sleep one hundred years. Surely that will be long enough for the villagers to find happiness, which will mean less work for me!" said Piper.

"I'm not sure the world works that way, but your wish will be granted." Puma chanted some cat-like sounds and Piper fell into a deep sleep.

One hundred years passed and Princess Piper woke up alone in a dark cave. "Puma are you here?" she yelled. There was no reply. Piper felt her way toward the dim light outside the cave until she was once again in the forest. She still had the map and followed it to the castle.

She ran into the garden then through the first floor. There was no one in sight. She ran upstairs checking every room on the second story, calling out as she went. There was no one in the castle. Piper ran to the village square as fast as she could. There was no market set up and no villagers anywhere. She called out, only hearing her echo in reply.

Piper dropped down to the ground sobbing. "What have I done? Where has everyone gone?"

"You've slept one hundred years," said a familiar voice. "After the King and Queen died, there was no heir to the throne. With no leader, everyone stopped working and eventually left the village when the food stores were gone."

Piper was shocked. She never realized how important the job of leader truly was. Now her wish had come true, and there was no work to do and no more depressing villagers. However, Piper still wasn't happy. In fact, she was less happy than before.

"Well, you could look for another wish cat. Or, you could get to work," Puma answered.

"There is not one way to find a wish cat, they either find you, or you could befriend every cat in the world until one reveals himself to you," said Puma.

Princess Piper Paxton pushed herself off the ground and walked toward the edge of the village.
"Where are you going?" asked Puma.

"To find some new villagers. I won't be able to rebuild Starsdale alone," she replied.

Short fairy tales can be read in only a few minutes and are usually under 1,200 words. Some good examples include:

Open A World of Magic

Fairy tales often feature mythical creatures like elves, trolls, and talking animals place in impossible situations that require kindness, love, and perhaps a bit of magic to overcome. Reading short stories like these alone or with an adult will open up a child's imagination and tap into their creative spirit. As a bonus, kids might just learn something in the process of stepping into a fantasy world.