Most children love rhymes, rhythm and humor, so short, funny rhyming poems for kids are a big hit for all ages. Since the establishment of the U.S.'s first children's poet laureate, Jack Prelutsky, kids' poetry has been getting a lot of attention, and parents and educators realize just how important humor and the structure of verse can be to a kid and to the reading process in general. Short, funny rhyming poems for kids can make reading and poetry appealing to children who may not be too fond of books, and they're great read-aloud material for kids of all ages and interests.

Dozens of poets pen verse for kids, but a few stand out above the rest as especially prolific and talented.

If you want to find books that contain light verse for kids, try heading to the children's poetry section of your local bookstore or library. Anthologies typically include a wide variety of poem types and authors, but collections of work by individual poets can also make great gifts for kids. 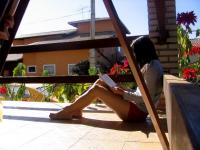