Reading twisted fairy tale stories are fun for both children and adults. These hilarious takes on traditional favorites are perfect for reading at home or in a school setting.

What Twists a Tale?

Just because a fairy tale is slightly different from the version you traditionally understand does not necessarily make it "twisted." After all, in the history of fairy tales, many cultures change the tale to suit their purposes. Generally, though, the basic premise and outcome stay the same.

With a twisted tale, readers get something unexpected that takes the story in a new direction. For children, the twist is usually funny or hilarious, while in the adult genre, it may be more sinister, sexually explicit or politically motivated. Elements that may change in a twisted tale include:

Sometimes the twisted tale is appropriate for both adults and children, though some elements may pass over a very young child's head, like in politically correct fairy tales. 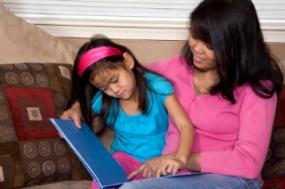 Test your knowledge of fairy tales with a quiz from LoveToKnow Children's Books.

Twisted fairy tale books may be grouped together with regular fairy tales in the children's section of your local library or bookstore. They may be in the general fiction area, too. Look for these titles, available at Amazon.com, when picking out a twisted tale for your child:

Another take on the twisted tale is instead of rewriting the story, authors will write sequels about what happens after the story's ending. In Goldilocks Returns, by Lisa Campbell Ernst, the title character revisits the bears and spruces up their home, much to the bear's dismay. The Frog Prince Continued, written by John Scieszka, tells how the princess and the frog didn't quite live as "happily ever after" as the original version would have the readers believe.

These twisted fairy tale stories have teaching potential for both parents and classroom teachers. Try doing these activities with your child:

Twisted fairy tale stories provide a great launching board for building vocabulary and comprehension work. By giving children a look at books that have a different version of facts, kids develop critical thinking skills necessary in life.