Kids' comic books feature everyday boys and girls with superpowers who seek to either destroy or save the world. While many comic book characters are male, there are plenty of female characters out there to empower little girls from all walks of life. 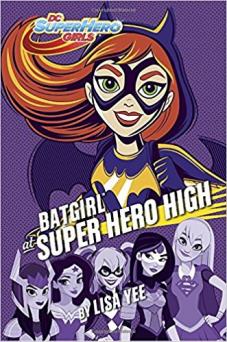 Barbara Gordon, daughter of Gotham City's Commissioner Gordon, is Batgirl. Barbara wants to be a detective, and she admires Batman, but her dad just wants her to stay away from danger. However, Barbara uses her fighting and computer skills to create an alter ego. She may not have traditional superpowers, but her biggest powers include using martial arts, well-planned strategies, and advanced technology skills to take down bad guys.

My First Book of Girl Power

The youngest readers get a quick and easy introduction to some of DC Comics' most popular female characters in DC Super Heroes: My First Book of Girl Power by Julie Merberg. This colorful board book is great for kids ages four to six.

These DC Super Hero Girls middle-grade novels by Lisa Yee feature favorite DC female superheroes and supervillains attending Super Hero High. Batgirl at Superhero High relays Barbara's journey as she discovers where she fits into the superhero universe. The series is also a television show and each character has been made into an action figure.

The Tiny Titans comic book series features ten books, each with several stories about DC superheroes and villains when they were little kids. Batgirl is one of many tiny characters in these fun books made for kids ages seven to ten by Art Baltazar.

As DC's first black female superhero, Bumblebee is a pioneer. Karen Beecher was a scientist dating one of the Teen Titans. In an effort to make him look good, she turned herself into Bumblebee, so he could defeat this new villain in front of his friends. Her plan didn't quite go as expected, but in the end, Karen got to make Bumblebee a new superhero. Karen's knowledge of science helped her create a suit that gave her the powers of a bee like flight, incredible strength, and the ability to shrink. Bumblebee also appears as a kid in the Tiny Titans series and DC Super Heroes: My First Book of Girl Power.

As one of the main characters from Super Hero High, Bumblebee and her friends are on the case to discover why the world's honey supply is disappearing. This novel by Lisa Yee is aimed at readers in upper elementary and middle school.

Harleen Quinzel is often seen as a villain working alongside the Joker after he turned her from a helpful psychiatrist into an evil prankster. The kid's version of Harley is not a villain, but the class clown who always wants to make jokes and works in a sneaky manner. She's an avid gymnast and all-around athlete who loves silly gadgets.

In this installment of the DC Super Hero Girls novel series, Harley notices something strange about the new carnival that just landed in town. With her friends and trusty mallet in tow, she's determined to get to the bottom of this mystery in Harley Quinn at Super Hero High by Lisa Yee.

Marinette Dupain-Cheng is a clumsy teen living in Paris who can transform into Ladybug with the help of a tiny magical creature named Tikki. When she transforms, she is fast, strong, and uses her special Yo-Yo and Lucky Charm move to defeat villains.

Based on the television show Miraculous: Tales of Ladybug and Cat Noir, this newer comic book series follows Marinette and her crush Adrien, who transforms into her crime-fighting partner superhero Cat Noir. While the teens are acquainted, neither knows the others secret identity. In Miraculous Adventures the dynamic duo venture outside of Paris to take on villains threatening other cities around the world. There are currently four issues available with at least three more slated for publishing in 2018. Although the main characters are teens, the comics have a lighthearted nature that works for kids of any age.

Nine-year-old Lunella Lafayette is a modern, diverse comic book character who has been officially named the smartest character in the Marvel universe. This little black girl is smart beyond belief because she is part of the race known as Inhumans. Although she knows her superpowers will be triggered one day, this clear thinker plans to have full control of how that scenario looks.

Devil Dinosaur was a comic book series in the 1970s featuring a giant red T-Rex and his cave boy sidekick, Moon Boy. The re-imagination of this series in modern times is Moon Girl and Devil Dinosaur. In the new series, the ultra-intelligent Moon Girl teams up with the T-Rex who is accidentally transported through time to today. The creators suggest the art style and content are suitable for both adults and kids in the same way as Pixar movies. The series features 27 comics so far, each incorporating other superheroes and villains from the Marvel universe.

The classic Poison Ivy character is one of Batman's foes. She's obsessed with plants and loves the environment, but often uses her connection with these living things to make plants her minions. When a love story went wrong for Dr. Pamela Lillian Isley, she accidentally gains the power to repel natural toxins and diseases. This is when Poison Ivy is born as the alter ego to a woman who was hurt by love. She definitely has a sweet side when it comes to dealing with plants, but her mean streak is aimed at humans. 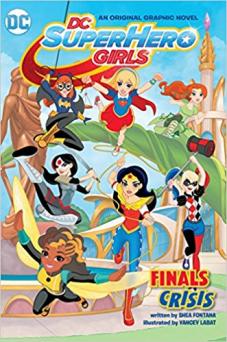 As one of the teen girls attending Super Hero High, Poison Ivy is a genius with the ability to control plants. Although she does work with her fellow female heroes, "Ivy" as they call her, prefers the company of her beloved plants. She believes plants have feelings and works hard to take care of them. The graphic novel versions by Shea Fontana feature all the girls working together to save others, cost about $10 each, and are meant for readers ages eight to twelve.

The original Spiderman, Peter Parker, has a teenage daughter named May. At around age 15 she discovers her own superpowers and an evil plot, so she throws on an old Spiderman costume and starts fighting crime. She inherits the same powers her dad had like incredible agility, strength, and adherence to almost any surface. Spider-Girl is smart, popular, athletic, and sarcastic which helps her fit in with other superheroes and avoid unnecessary battles.

Rated "A" for "All Ages" this long-running comic book series is packed with action, mystery, and lots of laughs. Readers follow teenage May, also known as Spider-Girl, as she attempts to defeat old and new villains. The Amazing Spider-Girl series is the first where readers follow Spider-Girl's adventures and learn more about her in thirty issues published from 2006 to 2009.

Thanks to her incredible popularity with readers, Spider-Girl came back to print from 2009 to 2010 for eleven issues in Spectacular Spider-Girl. Rated "A" for "All Ages" this comic book series features the same heroes and villains who appeared with Spider-Girl in other series on her quests to save her family, their city, and the world. 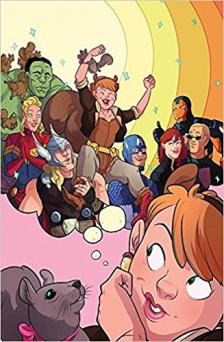 Doreen Green was just a girl who didn't realize she was also a mutant. After being bullied by classmates for her looks, Doreen discovered she could speak with and relate to squirrels. Using her newfound powers and admiration for Iron Man she made up a costume and decided to try becoming his sidekick. When that plan didn't pan out Squirrel Girl moved to New York City to fight crime with her squirrel buddies. Her powers include super strength and speed, small claws, and great agility.

Artist Erica Henderson re-imagines Squirrel Girl as a curvy young woman who is a college student by day and crime-fighting superhero on the side. In this comic book series writer Ryan North pits Squirrel Girl against familiar villains like Kraven the Hunter and Galactus. The Unbeatable Squirrel Girl series includes six current issues and has been praised for its humor which makes it great for teens and adults. In 2017, the series won an Eisner Award in the category Best Publication for Teens ages thirteen and up.

Through many hardships, Princess Koriand'r of Tamaran uses her troubled past as fuel to become a great protector and warrior for good. As an alien, she can absorb ultraviolet radiation and turn it into energy for flying or project it as a blast. As Starfire, the Princess is a loyal partner who seeks to help good win out over evil and save others from enduring pain.

As a student at Sidekick Elementary School Starfire fights alongside the other Tiny Titans using their superpowers to make up for their age and size. Since she's not from Earth, Starfire struggles to fit in but never gives up.

Princess Diana of the immortal Amazons gets a rare chance to head off the isolated island home of Themyscira she's always known. As she seeks to promote peace among the people of her home and those in this new land, Diana uses her superpowers to become Wonder Woman. She's got great strength and speed, bulletproof bracelets, and the Golden Lasso of Truth on her side as she fights new evils. Wonder Woman is another of the female characters featured in DC Super Heroes: My First Book of Girl Power.

At Super Hero High, Wonder Woman is still learning to fit in with the people of this world, but her courage and leadership skills help her through the struggles. In this 250-page middle-grade novel by Lisa Yee, everything from social media to boys is new to Wonder Woman.

Scooby-Doo and the gang are on the case to solve mysteries and fight crime with the help of comic book superheroes like Wonder Woman. In issue number five, Velma and Daphne learn to be Amazons like Wonder Woman then use their new skills to help the rest of their friends solve a mystery.

This newer character stars in her own graphic novel series by Ben Hatke. Zita is a typical girl living on Earth until her best friend gets abducted by aliens. Zita ends up on a weird planet filled with robots and humanoid chickens with only her own skills to get her home. Written for kids ages eight to eleven, the series features three graphic novels chronicling Zita's adventures through space to save her friend, the world, and get home. Each book runs around 200 pages and costs just over $10.

These fun female characters show boys and girls that superheroes and villains could be anyone. Comic book characters like these ladies pack all the power and excitement of their male counterparts in feminine form.