Readers first met Harry Potter as a lonely, orphaned, almost-eleven-year-old on the brink of a great adventure. Burdened by life with the intolerable Dursleys, Harry is delighted to discover he is a wizard. In Harry Potter and the Deathly Hallows he returns as a young man. It is Harry's final year at Hogwarts, his beloved wizarding school, and the year will not pass by in a calm academic haze. Lord Voldemort, infamous dark wizard and Harry's nemesis, is still around and still wants Harry dead.

A Story for All Ages

This book is intended for those who have followed Harry's life in the first six books. Scholastic suggests the interest level for this novel is grades 3 - 8, but that the reading level is 6.9, meaning the writing is for kids in the 6th or 7th grade. Of course, those who have been obsessed with Harry's odyssey from the beginning will want to read this whether they are in elementary school or ninety years old. Bear in mind though, Common Sense Media reminds parents that as Harry ages, the story lines become more dark and serious. 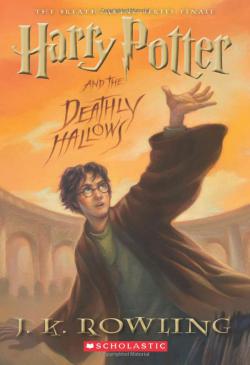 Harry Potter and the Deathly Hallows is the seventh and last book in J.K. Rowling's Harry Potter series. The novel features Harry and his faithful friends, Hermione and Ron, once again acting as the forces for good against the evil Lord Voldemort and his Death Eater minions.

This is Harry's final year at Hogwarts School of Witchcraft and Wizardry but, instead of taking his exams like a regular student, Harry has an important task to complete. He has discovered Voldemort, using deep, dark magic, has split his soul into seven and created "Horcruxes" to hide the little bits of soul in. Voldemort cannot be defeated until all these separate pieces of soul are found and destroyed. Therefore, Harry must hunt and obliterate every Horcrux before facing the dark wizard in person.

In the magical world, the age of seventeen is quintessential. It is the age at which a wizard or witch is considered an adult. Thus the protection put upon Harry by his mother to keep him safe from Voldemort throughout his childhood will fail upon his seventeenth birthday. Harry's friends, therefore, realize the imminent importance of hiding Harry away, hatching a cunning plan to ensure the teenage wizard stays safe.

While hiding out at Ron's home and awaiting a wedding between two of his friends, Harry receives a visit from the Minister of Magic. Apparently, Dumbledore has left Harry something in his will. The Minister finds this suspicious and questions Harry at length. It turns out Dumbledore also left mysterious presents for Ron and Hermione. None of them have the faintest idea why Dumbledore left them these particular gifts.

As everything they have known and hoped for begins to fall apart, Harry, Ron and Hermione are forced to find a more obscure hiding place. They begin hunting the Horcruxes in a desperate bid to kill Voldemort and finally rid the wizarding world of his dark magic. However, they realize they do not know where to start. On top of that, if they ever do find the Horcruxes, it is debatable whether the friends truly understand the depth of evil these little receptacles contain.

During the Horcrux hunt, Harry and his friends find themselves at the home of one of their former school mates, Luna Lovegood. Luna is not there but her father, Xenophilius, tells them a wizarding fairy tale. He narrates the story of the Deathly Hallows. This tale, which Ron and Hermione realize they have heard before, turns out to be of some significance. It leads the friends in unexpected directions as they continue their hunt for Voldemort's ravaged soul.

No Harry Potter book would be complete without a scorching climatic scene and this one does not disappoint. Harry faces many choices and obstacles in this last installment. The twists and turns Rowling writes to keep the reader enthralled up to the end are surprising and plentiful. Many loose ends are tied together in the final chapters and many characters reveal hidden depths which may surprise some readers.

Most characters here are those that readers already know from the previous books.

The wizard hero returns again. Harry is seventeen now and in his final year at Hogwarts. He is still friends with Ron and Hermione, and he now has a girlfriend. He has lost Dumbledore, his great mentor, and so he must stand on his own two feet more than he has before. The young wizard is developing into a mature and sensitive man.

Hermione is still the cleverest witch in her year, and, without her, Ron and Harry would probably stay at home scratching their heads. Hermione has grown into a complex young lady who, incongruously, still holds a bit of a torch for Ron.

Ron reveals more of a serious side in this last novel. Like Harry and Hermione, he has matured from the joker of the first few books into a more intricate character. With that said, Ron is still good for a laugh and often able to see the funny side of life, even when confronted with truly daunting circumstances.

Yes, he's dead. Of course in the magical world, witches and wizards never fully disappear, and Dumbledore is no exception. The great, all-knowing wizard is humbler in death but is, nonetheless, the Dumbledore all readers have all grown to love.

Is Snape a good guy or a baddie? This seems to be the question most readers have been asking each other since book one. The greasy-haired professor is still as snarky as usual and still has a problem with Harry. However, in Harry Potter and the Deathly Hallows, the reader begins to understand what may have caused to Snape to turn out this way.

Neville would possibly be the character voted most likely to succeed at nothing. He never seems to get much right. However, the Sorting Hat did, as most may remember, put Neville in-house Gryffindor which suggests his overriding characteristic is bravery. Neville certainly proves the Sorting Hat right in this book.

Xenophilius is the father of Luna Lovegood and the editor of the rather odd, rather paranoid wizarding newspaper: The Quibbler. He is instrumental in this book as being the story teller who reads the tale of the Deathly Hallows to Harry, Ron and Hermione and inadvertently directs their quest.

What would a Harry Potter book be without Lord Voldemort? In this last installment, Voldemort, a.k.a. He Who Must Not Be Named, a.k.a. You Know Who, a.k.a. Tom Marvolo Riddle, is looking to put an end to Harry and resume his reign as Greatest-Evil-Wizard-In-Charge-of-the-World without the annoying Harry around to keep spoiling his plans. In this last novel, he is getting desperate and desperate men often make foolish mistakes.

Draco, at seventeen, is still bigoted and arrogant. However, readers are still contemplating if he is evil? Having been instrumental in causing Dumbledore's death, it would be easy to assume this young wizard is set on a career of death and destruction. However, it might just be too early to say.

Although some critics have suggested J.K Rowling's writing is not as perfect as it could be, her legions of fans speak to Harry Potter's huge appeal and this installment of the series has received many great reviews:

Like all the predecessors in the series, Harry Potter and the Deathly Hallows has won several awards, including:

Harry Potter and the Deathly Hallows can be bought from the original publishers, Bloomsbury Press, in several formats with several cover design options. It is also available from most other booksellers, including from Amazon.com in paperback, hardback, Kindle format, and audio cd and from Barnes and Noble in hardcover, Nook version, audio book, and paperback.

The End of an Era

While there is probably material for many more Harry stories, J. K. Rowling insists this is the last one. The world of Harry Potter spanned a decade, as Rowling wrote from 1997 to 2007. When Harry Potter and the Deathly Hallows was published, it felt a bit like the end of an era. Rowling allegedly cried when she finished writing the story. Many fans of the series will cry when they finish it too.