Award winning author, Laurie Halse Anderson has delighted children with her books for almost two decades. Spanning a variety of genres, from historical fiction to fiction to even non-fiction, Anderson continues to delight with masterful language and intriguing plots that bring her subjects, characters and the events in her books to life.

Anderson has one fiction series and one fiction book out for children. Her fiction series, Vet Volunteers, focuses on animal welfare issues whereas her lone book is a humerous look at what happens when adults try to force kids to fit into a box.

The Hair of Zoe Fleefenbacher Goes to School 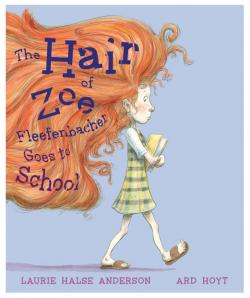 The Hair of Zoe Fleefenbacher Goes to School

The Hair of Zoe Fleefenbacher Goes to School is an inventive tale that features Zoe and her bright red hair that can do literally anything. While her kindergarten teacher embraced the locks as helpful, Zoe's new first-grade teacher explains 'first grade has rules' and thus, Zoe finds herself taming her mane with scrunchies, bobby pins, duct tape, and barrettes galore. The book is funny to the younger set (think first graders) and makes a great read aloud. On top of that, everyone has a happy ending, as Zoe's hair ends up saving the day with a science experiment gone a little wonky. Publisher's Weekly praises the picture book for being "utterly sympathetic to the ways in which a bad class placement can turn a child's world upside down."

The Vet Volunteer books are a series of books focused on Maggie, an 11-year-old girl who volunteers at the Wild at Heart Animal Clinic. Each book uses fiction to focus on a different animal rights issue, making them ideal for animal lover in your family. The books are written at a solid fourth-grade reading level, making them idea for the socially conscious later elementary crowd. Titles in the series (in order) include:

Laurie Halse Anderson has also written several nonfiction titles for children. Fascinated with the genre of historical fiction, she has taken to focusing her nonfiction work for children, thus far, on important female characters from history. 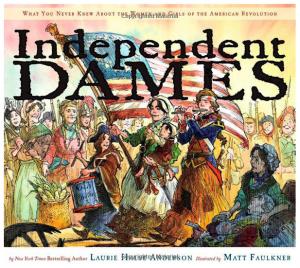 Ever wonder who the women behind the Revolutionary War were? Independent Dames explores the women behind the scenes and all they did to propel America to Independence. The book profiles 89 women, through biographical sketches and humorous illustrations to keep the reader fascinated and engaged. As noted in BookVerdict, Independent Dames was paised by the School Library Journal and The Horn Book as a great read for a side of history many students don't see.

Thank You, Sarah! tells the story, somewhat sarcastically, of Sarah Hale, who wrote more than 30 letters to several sitting presidents to get Thanksgiving recognized as an official holiday. Concerned that the observance of Thanksgiving was waning, Sarah took it upon herself to petition, and petition, and petition... until finally she got someone to listen. The book is suitable for early elementary, but would inspire any would-be world changer with the idea that with some persistence, you really can get things done. Publisher's Weekly praises it for its humorous tone. 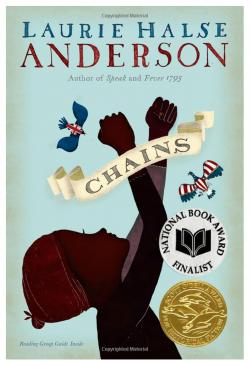 Chains is set during the Revolutionary War and follows the tale of a slave named Isabel as she works for her freedom. Finding herself and her sister in an unthinkable situation, Isabel gets involved with the Revolutionary War by spying on her cruel owners in hopes of securing her freedom. Common Sense Media points out the book contains violence as it pertains to the daily life of a slave. Consequently, the book is most appropriate for children in sixth grade and up. The book has won numerous awards including the Scott O'Dell award for historical fiction. It was also selected as a 2009 Notable Children's book and was a 2008 National Book Award finalist.

Out of Print Books

Sometimes publishers stop publishing an author's book. Consequently, these titles for children are definitely hard to find, but worth mentioning,

Often funny and irreverent, Anderson is a master storyteller. Whether she is promoting animals welfare through her writing, weaving fiction with historical fact, or telling the story of heroines of a bygone era, kids will be hard pressed to resist her charms.