The Book Thief, by Markus Zusak, is an unusual story set within the often frightening and incomprehensible world of Nazi Germany. The element of historical fact makes The Book Thief an excellent choice for schools, reading groups and homeschooling. However, Zusak's unique storytelling, lovely writing and charming characters make it worthy of a look from anyone who appreciates excellent literature.

The Book Thief is set in Molching, a fictional German town close to the real city of Munich. Molching is about 10 miles from Dachau, the infamous concentration camp. Although this detail is important, the tale never takes the reader to Dachau. Within Molching, much of the action occurs on Himmel Street (Himmel translates as Heaven) where the main character, Liesel Meminger, otherwise known as the Book Thief, lives.

Liesel Moves to the Hubermann's

The story begins in 1939 with Liesel traveling by train to Molching with her mother, who is a mysterious character, and her sick brother. The plan is for both children to live with Rosa and Hans Hubermann who live at 33 Himmel Street. Liesel's brother dies, and so it is only the grieving girl who becomes the Hubermann's foster child.

From 1939 until midway through 1943, Liesel's life is chronicled by an unusual narrator: Death. Zusak's Death is not the stereotypical, scythe-wielding character of legend, but a more laid-back, sensitive guy. Throughout these war years, Liesel, with her best friend Rudy constantly in tow, plays soccer, learns to read with the help of her foster father, and of course, steals a few books.

Although not without its charm, life is challenging on Himmel Street. The sun barely seems to shine during this Nazi-influenced era, and Liesel, the Hubermanns, Rudy and all the street's residents are constantly on the verge of starvation. Then, when a young Jewish man named Max seeks refuge in the Hubermann's basement, life in 33 Himmel Street becomes just a little more complicated.

The Book Thief features several memorable characters. Some of the most important are: 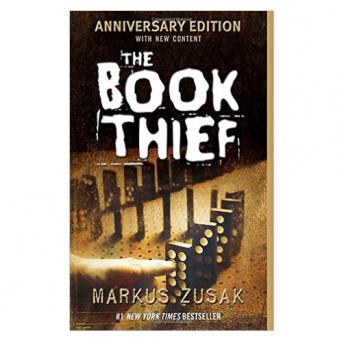 According to the New York Times, parents should know The Book Thief was published in Australia with an adult audience in mind. It does, after all, have an adult theme. However, this book is aimed at young adults in the United States and might also appeal to mature, middle-grade students who are fascinated by the subject. Scholastic suggests the interest level for The Book Thief is eighth grade and up, while its reading level is fourth grade, making it a great high interest, low reading level book.

Most reviews have been positive, though the book is not unanimously praised.

The Book Thief has won several awards, including:

The Book Thief is a unique and experimental piece of literature. It deals with an unhappy era in a sensitive and compelling way. You can purchase it on Amazon.com in paperback, Kindle format and as an audio cd. There is also a 10th-anniversary edition at Barnes and Noble in hardcover, Nook version and an audio book. This story may suck you in and leave you breathlessly unable to stop reading. Have a box of tissues beside you just in case!