L.M Montgomery's Anne of Green Gables series starts out as children's novels and, as the main character ages, become more like YA novels. Published in 1908, this classic series has never been out of print. While you'll need to read the books to get the full effects of its themes, this brief summary can help readers of all ages decide if the series deserves a place on your bookshelf. 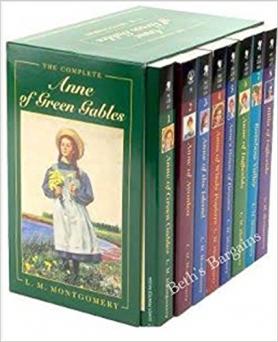 The series of eight books follow the life of a girl named Anne Shirley as she journeys from orphan to mother on Prince Edward Island in Canada. Readers watch Anne mature and learn to fit in new places and discover the meaning of "home." Some might say there's a ninth book in the series, as an official prequel, Before Green Gables, came out in 2008. Children's author Budge Wilson wrote the prequel about the death of Anne's parents and her childhood before Green Gables in celebration of the first book's 100-year anniversary.

Published in 1908, the first book introduces eleven-year-old Anne in a 300-page novel set on a farm in Canada. When an old brother and sister farming team realize they won't be able to keep up with their work they decide to adopt a boy to help out. By accident, Anne comes to their home and infuses their lives with spunk and the unexpected.

With around 30 chapters, this second book was published in 1909. Readers follow teen Anne as she moves to Avonlea to be a schoolteacher and takes on the parenting of two younger, distant relatives.

Anne of the Island

Several years later, in 1915 the third book was published. It's time for Anne to head off to college in Nova Scotia, with a few of her close friends, where she learns more about herself than anything else.

Although this was the seventh book published in 1936, it is the fourth in chronological order of Anne's age. Told through letters Anne wrote to Gilbert, this book chronicles Anne's time between college and marriage where she was the principal of a school.

Published in 1917, readers follow Anne on the next phase of her journey as she gets married and moves into her dream house.

Anne returns to her old home with her children and readers get a glimpse into their youthful, mischievous adventures. Although this was the last book published in the series, it is not the oldest depiction of Anne.

Anne is now the mother of six children. Much of the book centers on a new family in town, the Merediths, who are wild children since their mother died. Originally published in 1919, this penultimate book launches into the next generation of characters.

Published in 1921, the plot fast-forwards to World War I. Readers follow the lives of Anne's children including her youngest daughter, nicknamed "Rilla," through the turmoil of life during a war.

Throughout the series, there are a few main characters readers grow to know well.

Although the Anne of Green Gables series is a beloved set of novels, it hasn't won many awards. However, the books have been adapted into films and rewarded by many other honors.

Thanks to its instant and lasting popularity, the series has been adapted dozens of times on screen and stage. Some of the most notable adaptations include:

L.M. Montgomery and Anne of Green Gables were honored with a Canadian postage stamp in 1975 and 2008. Based on reader votes through a BBC survey, Anne of Green Gables earned a spot on The Big Read's Top 50 most loved books of all time list. In 2012, School Library Journal named the first book one of the Top 10 chapter books.

Books to Grow With

The Anne of Green Gables series is a set of classic literature that grows along with the reader. Those who can't get enough of Anne can take their experience to the next level by watching all the film adaptations and even visiting Green Gables in Canada.