The Dork Diaries book series is written and illustrated by Rachel Renee Russell. The books follow the life of 14-year-old Nikki Maxwell as she navigates the ups and downs of middle school life. Beloved by tweens and teens around the world, the books gained attention from Hollywood producers who plan to turn the series into a major motion picture.

In an interview on Kidsreads.com, Russell says that much of her material comes from her and her daughter's middle school experiences. She defines a dork as "...a person who doesn't fit in with or aspire to be like other kids."

Nikki Maxwell is the star of the Dork Diaries book series. Unhappy that she must attend a ritzy middle school as part of her dad's employment contract, she turns to writing about her daily heartaches, hopes and hi-jinx in her diary. Each book chronicles Nikki's diary entries as she makes friends yet struggles to fit in.

Nikki is in the eighth grade but the books are also read by kids younger and older. The recommended age is 9-13. Kids who are either in or about to enter middle school (ages 11-14) will relate to and love the books. But middle school life is tough and, although the books are humorous and lighthearted, they also cover more mature topics such as fighting with parents, getting a cell phone and boyfriends. Since kids mature at different rates, parents of younger children in the spectrum should review the books to determine if they are a good fit.

There are eleven published Dork Diaries books and a twelfth due to be published in October, 2015. Books may be purchased at the Dork Diaries website, Amazon, book stores and most big box stores.

The first book in the series sets the stage for the others. This book introduces eighth grader Nikki Maxwell as she is transferred to a private middle school full of snobby, mean kids. Readers follow Nikki's daily life in and out of school - including meeting her best friends, her first crush and fighting with her mom - through her diary entries, scribbles and doodles. The book also introduces Mackenzie, a CCP (cool, cute and popular kid) who is determined to make Nikki's life difficult and labels her a "dork."

Just when Nikki is adjusting to life at her new school, she learns her crush is going to the Halloween dance with number one mean girl, Mackenzie. After committing to go to a kid's party with her little sister, she learns Mackenzie was lying. Nikki determines to attend both events and spend time at the dance with Brandon and a series of nutty events unfold.

Nikki is determined to stop kids at school from learning the embarrassing fact that she attends the school because her dad is the school's exterminator. When the school holds a talent competition for a scholarship, Nikki sees it as the perfect opportunity to prevent anyone from learning her secret.

After losing her diary, Nikki goes on a mad search to find it. In the process, she enlists the help of her BFF and comes up with a list of diary writing tips and ideas. The book includes space for readers to write their own diary entries and drawings. 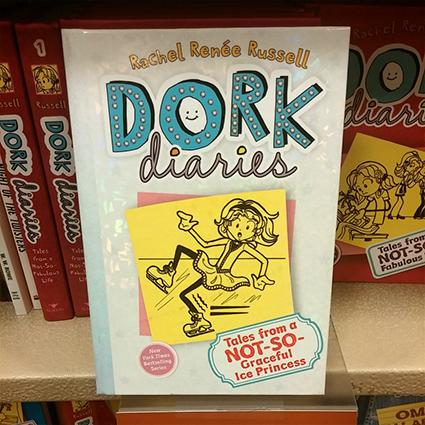 After discovering her crush, Brandon, volunteers at an animal shelter, Nikki and her friends enter an ice skating competition to raise money for the shelter. But when mean girl Mackenzie also enters and is determined to sabotoge Nikki's chances, Nikki makes sure she comes out on top.

Nikki joins the school newspaper staff as an advice columnist to prevent gossip-columnist Mackenzie from spilling the beans about her crush Brandon. But when letters come in fast and furious asking for advice, Nikki is overwhelmed and turns to her friends for guidance of her own.

The most important school dance is on the horizon and Nikki wants nothing more than to ask her crush Brandon to go with her. After getting mixed signals from him, a not-so-flattering picture of her falls into the wrong hands and is made into posters for all to see. Nikki must decide if she is strong enough to overcome her embarrassment and ask Brandon to the dance.

Nikki experiences her first kiss and shares the intimate details in her diary. But when she is followed around by a camera crew for a reality show, she worries that her crazy-busy schedule will impact her new relationship, especially when Mackenzie steps in to wreak havoc.

Dork Diaries 8: Tales from a Not-So-Happily Ever After

After getting hit on the head in gym class, Nikki dreams she, her friends, Brandon and Mackenzie are characters from popular fairy tales. But the tales take unexpected twists and turns as Nikki tries to find her way home.

Nikki gets kissed by Brandon, but was it just so he could get free pizza? While Nikki worries if the rumor is true and gets in a fight with Brandon over the issue, MacKenzie takes over Nikki's diary and starts to write in it to try to get Nikki in trouble. All is well in the end though, with Brandon and Nikki making up and MacKenzie headed off to another school.

Nikki has to find a way to hide seven puppies. While challenges abound, hilarity ensues. Will Nikki be able to save the day?

Dork Diaries 11: Tales from a Not-So-Friendly-Enemy

Dork Diaries: OMG! All About Me Diary

This book offers questions to help kids learn about themselves and provides a place for them to write about thoughts and experiences. Nikki also chimes in and offers wisdom, guidance and artwork throughout.

For most girls, drama and struggling to fit in is a big part of middle school life. The Dork Diaries book series is known as the Diary of a Wimpy Kid for girls for good reason. It offers them a protagonist and characters they can relate to. It takes the stigma out of being different and teaches kids it's okay to be a dork. The books' humorous approach helps take the sting out of middle school conflicts while encouraging kids to journal experiences.