Like all the Harry Potter stories, Harry Potter and the Goblet of Fire is a fast-paced, dramatic tale set in Hogwarts School of Witchcraft and Wizardry. The Goblet of Fire features an exciting competition as the main plot as well as several important subplots, allowing the reader to view a wider scope of wizarding life. It is a chunky book that introduces many new and interesting personalities to the magical mix.

Mr. Crouch is a dour Ministry of Magic Official. Harry and Ron first meet him at the Quidditch World Cup. He comes to Hogwarts as a Triwizard judge, and he is the unforgiving and judgmental father of Barty Crouch, Junior.

Barty is the allegedly dead, Voldemort-supporter-son of Barty Crouch, Senior. He is also a former Death Eater.

Ludo is a retired Quidditch Beater who played for England. He appears as a Quidditch World Cup commentator and a Triwizard judge. There is some evidence he was involved with the Death Eaters when he was younger, but the characters assume he is too stupid to be evil.

Alastor Moody is a somewhat paranoid former Auror (dark wizard hunter) with one magical glass eye. He comes to Hogwarts as the new Defense Against the Dark Arts teacher but the curse of that position seems alive and well and Moody feels the effects of this.

Igor is the repulsive headmaster of Durmstrang with a dubious past.

Fleur is a beautiful, part-veela Beauxbatons student and a Triwizard champion.

Cedric is the chosen Hogwart's champion. He belongs to house Hufflepuff, and his fellow house members are delighted their house is finally enjoying some glory until Harry upstages them. Cedric is a handsome, charismatic young man.

Olympe Maxime, headmistress of Beauxbatons, is a very tall lady. In fact, she is Hagrid-style tall. Although she vehemently denies any giant heritage, there is clearly more than human in her genetic makeup. Hagrid is enamored with her and takes his horrible hairy suit out of storage far too often for anyone's peace of mind.

Winky, the Crouch family house elf, is the epitome of everything a good house elf should be: subservient, obedient, and discreet. 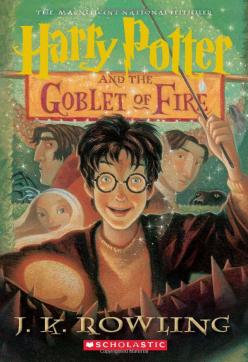 While Harry Potter and the Goblet of Fire still takes place in the mythical setting of Hogwarts School of Witchcraft and Wizardry, its central premise is more about a magical competition than regular school life. This competition is the Triwizard Tournament, established seven hundred years ago as a way to foster amity between the three largest European wizarding schools of Hogwarts (Great Britain), Beauxbatons (France), and Durmstrang (Northern Europe, exact location unknown). Traditionally, one champion from each school is chosen and must compete in three magical tasks.

For this year's event, hosted by Hogwarts, Dumbledore takes what he thinks are adequate precautions to ensure only students over seventeen years old can enter the competition. He uses an impartial judge to select the school's champion.

The precaution is an age line. When students under seventeen attempt to pass the line and place their names in the cup, the line ensures these names are spat back out, and the students are temporarily hit with an aging spell. The age line works as Fred and George, the Weasley twins, can attest to. However, something goes wrong with the selection process and, instead of three names, the Goblet spits out four.

The Goblet of Fire

The impartial judge is none other than the Goblet of Fire, which is, as the name implies, a fiery goblet into which the names of potential champions from all three schools are placed.

Meanwhile, it is still a regular year at Hogwarts for many, despite the Triwizard competition and the excitement of the foreign students. Life does not stand still for Voldemort and his circle of Death Eaters either.

Harry and Ron get to watch the thrilling Quidditch World Cup between Bulgaria and Ireland during the summer holidays. The World Cup, being such a large event, takes place in the Muggle world. The Muggles' memories are obliviated to ensure they know nothing about the event happening right under their noses. During the World Cup, the boys see Viktor Krum who is the youngest ever Bulgarian Seeker. Little do they know, Viktor will soon be visiting their school as the Durmstrang Triwizard champion.

Harry and Ron meet Barty Crouch, Senior, a Ministry of Magic official, at the Quidditch World Cup. Later Harry learns Mr. Crouch had a son, Barty Crouch, Junior, who apparently died in Azkaban, the wizard prison, thanks to his membership in Voldemort's Death Eaters club.

Readers learn a lot about the secret life of house elves in this installment of Harry Potter. Readers meet Winky, the fiercely loyal elf who serves the Crouch family, reacquaint themselves with Dobby, and discover the host of elves who labor to keep Hogwarts shiny and spotless. Hermione feels called to action when she finds out about this army of unpaid labor and creates SPEW, the unfortunate acronym for Society for the Promotion of Elfish Welfare.

Yes, Voldemort is still around, and he still wants Harry dead. Fans of the earlier novels may recall Voldemort has still not managed to grow himself a new body. In this fourth book, he has concocted a scheme to change this. All he needs, it seems, is the "bone of the father," "flesh of the servant," and "blood of the enemy." Voldemort manages to scrounge a bone from his dead father, Wormtail is the somewhat willing servant who provides the "flesh," and Harry, naturally, makes the ideal enemy from whom to obtain the blood.

The fourth-year Hogwarts students are beginning to discover the joy of young love, and the boys are learning about the trauma associated with asking a girl to a dance. Harry and Ron are disappointed when their first choices turn them down, but Hermione steals the show with her surprise date.

A Maze of Subplots

Common Sense Media points out Harry Potter and The Goblet of Fire ups the horror and the seriousness compared to the last three books. This novel is longer than previous Harry Potter books, and the plot is dense. However, Rowling is noted for her convoluted yet meaningful storytelling, and all the various subplots intertwine and make perfect sense. Although horribly sad in places, a teenage or older audience will relate to Harry, Ron, and Hermione's developing maturity, sensitivity to issues, and burgeoning adolescent angst. Settle down in a comfy chair with a butterbeer and prepare to spend the night, or even a weekend, immersed in this gripping tale.