Many consider Roald Dahl to be one of the greatest children’s authors of the twentieth century. Some of Dahl’s best known books for children include Charlie and the Chocolate Factory, Matilda, and James and the Giant Peach. His books have been published in 50 languages and sold more than 100 million copies around the world.

Roald Dahl was born September 13, 1916 in Llandaff, South Wales. His childhood was marred by tragedy when his older sister, Astri, died of appendicitis at the age of seven in 1920. A few months later, Dahl's father passed away. His early years are described in the book, Boy.

During World War II, Dahl joined the Royal Air Force, and his book, Going Solo, describes his exploits as a WWII pilot from 1939 to 1945.

Roald Dahl’s first children’s book, The Gremlins, was published in 1943. After reading the book to her grandchildren, First Lady Eleanor Roosevelt invited Dahl to the White House for dinner. Dahl became good friends with the Roosevelts and often visited their country house. 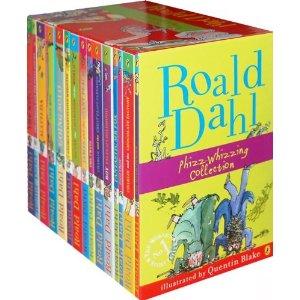 Despite being a very successful writer, Roald Dahl’s life continued to be full of obstacles. Theo was severely injured as a baby when his carriage was struck by a taxi, and his daughter Olivia died of measles encephalitis at age seven. His wife suffered three cerebral aneurysms while pregnant with his daughter Lucy. Dahl himself was plagued by crippling back pain throughout most of his life and underwent several surgeries in attempts to alleviate the problem.

Roald Dahl died November 23, 1990 in Oxford, England at the age of 74. He is buried in the cemetery at St. Peter and St. Paul's Church in Great Missenden, Buckinghamshire, England.

Despite being best known as a children’s book author, Roald Dahl often remarked that this was not the path he expected in life. If not for his children, he said, he never would have considered making a career out of writing stories for young readers.

Dahl’s children gave him strong opinions about the books children would enjoy reading, and the success of his work supports their input. He was not popular with teachers and librarians, however, as they considered many of his books either too violent or simply inappropriate for children.

In addition to his books for young readers, Roald Dahl produced several pieces for adults throughout his life. He often wrote short stories that were published in magazines such as Ladies Home Journal, Harper's, Playboy, and The New Yorker. These macabre tales typically featured a dark sense of humor and a surprise ending. Roald Dahl also wrote for film and television on a fairly regular basis. He prepared scripts for several episodes of Alfred Hitchock Presents in addition to working on the adaptations of his children’s books The Gremlins and Charlie and the Chocolate Factory.

Roald Dahl’s legacy is impressive. His children’s books are even more popular today than when they were first published. September 13 is "Roald Dahl Day" in Africa, the United Kingdom, and Latin America. In 2005, the Roald Dahl Museum and Story Centre opened in Great Missenden to celebrate his literary achievements. His widow continues his commitment to helping seriously ill children through Roald Dahl's Marvellous Children's Charity, formerly known as the Roald Dahl Foundation.