When three young children - Violet, Klaus and Sunny Baudelaire - are orphaned, they are sent to live with their 'uncle,' Count Olaf. When he turns out to be a villain, the kids head off to live in a variety of other inappropriate homes. Throughout the series, the kids learn about good and bad as they attempt to keep Count Olaf from taking what's theirs. Lemony Snicket, an investigator who consistently warns readers to put the book down because it is so awful, narrates each harrowing tale. You can purchase books individually or the entire set of 13 for around $120.

First published in 1999, The Bad Beginning details all the misfortunes and miserable circumstances of Violet, Klaus and Sunny's lives. The kids learn of their parents' deaths and are sent to live with Count Olaf. The Count turns out to be a terrible caregiver as he plots against the children.

Uncle Monty is the children's next caregiver. As the kids help their uncle care for his rare reptiles, his assistant connives to get the kids. Meanwhile, Count Olaf makes a triumphant return. Will the family get rid of him once and for all?

When Uncle Monty can no longer take care of them, the children are once again homeless and sent to live with a distant relative. Aunt Josephine takes them in and seems like the best caregiver so far until she needs rescuing. Count Olaf appears and the Baudelaire children must try to escape again. 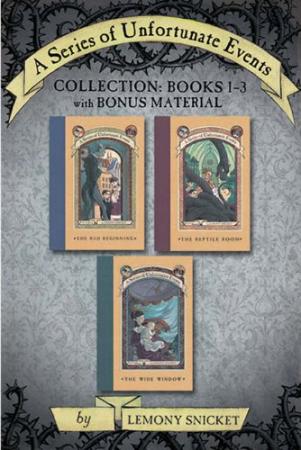 This time the kids are sent to a lumber mill to work for a man called Sir. After an accident, Klaus must visit an eye doctor. When he returns from the appointment, Klaus isn't normal. Who will Count Olaf disguise himself as and will the children escape his clutches again?

The children are sent to a preparatory school where they live in a shack on the school grounds. The Baudelaires clearly don't fit in, and of course, Count Olaf is lurking nearby in disguise.

The children's next guardians are a husband and wife obsessed with staying on top of trends. As their new caregivers plan a charity auction, the children discover a secret the wife has been hiding. 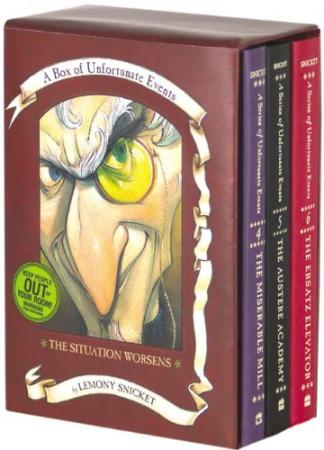 The Situation Worsens: A Box of Unfortunate Events, Books 4-6

Since a single guardian or family doesn't seem to be enough for the Baudelaires, they are sent to live under the care of an entire village. However, they discover more secrets and Count Olaf makes another attempt to get his hands on those kids.

The children begin working in a hospital when Violet is kidnapped. Can Klaus and Sunny save her and figure out how Count Olaf is involved?

Violet, Klaus and Sunny are on the run and stuck with Count Olaf, although he doesn't realize it. They become sideshow freaks before bad luck takes over again. 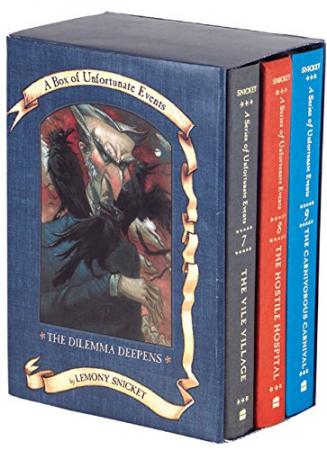 The Dilemma Deepens: A Box of Unfortunate Events, Books 7-9

The children get separated heading up a snowy mountain. Violet and Klaus run into some unexpected friends who help them find Sunny.

The children find themselves on a submarine and make more new friends. However, when Count Olaf appears, they must once again escape.

In this second-to-last book of the series, the Baudelaires become concierges at a hotel. They encounter many familiar faces through their work. When trouble comes their way, the kids find themselves in the most challenging predicament yet.

Marooned on an unfriendly island, the children must survive among enemies and misfortune. Will it be a happy ending for the Baudelaires? 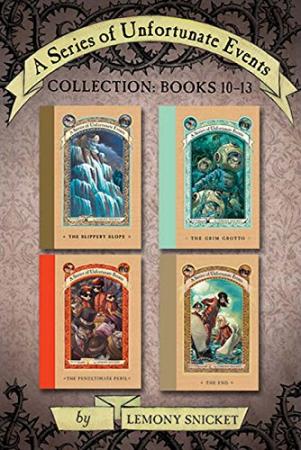 Daniel Handler is the real author behind the narrator and attributed author, Lemony Snicket. Under this pseudonym, Handler has written three Unfortunate Events companions, four picture books, and the All the Wrong Questions children's series. Under his real name, Handler wrote six novels for adults.

Books in the series have appeared on The New York Times and USA Today best-seller lists and won several awards including:

Read Them If You Dare

A Series of Unfortunate Events books are full of misfortune and terrible things, warns the author/narrator. If you are brave and strong enough to make it through the books, start reading. However, be forewarned, you won't be able to stop until the end.