The story of Jason and the Golden Fleece is one of the best known of the ancient Greek myths. As the first known story in which a mortal hero is on a quest for a seemingly impossible prize, its plot devices have been used in many Western fairy tales. In an interview about his recent translation of classic fairy tales from the Brothers Grimm, Professor Jack Zipes notes that many fairy tales have their origins in the story of Jason.

Jason's father, Aeson, was the king of Iolkos. However, his brother, Pelias, overthrew Jason's father and ruled over Iolkos. He was fearful that he would one day be overthrown and consequently had all of Aeson's descendents be killed. Fearful that Jason too would be killed, his mother sent Jason as an infant to be raised and educated by the centaur Chiron (who is noted as having educated several other Greek heroes.)

Meanwhile, King Pelias, ever fearful of being overthrown consulted an oracle. The oracle warned him to be careful of the stranger with one sandal.

To reclaim the thrown, Jason set out for the City of Iolkos to confront his uncle, King Pelias. On his way there, he took the time to help an elderly lady cross a flooded stream. While doing this, he lost one of his sandals. Unbeknownst to him, the old woman he helped was really the goddess Hera in disguise. For his kind act, she blessed him and helped him throughout his quest for the thrown.

When Jason finally reached Iolkos, he challenged his uncle's claim to the throne. While King Pelias feared Jason because of the prophecy about the single sandal, he agreed to give up the throne if Jason would retrieve the heavily guarded Golden Fleece. Pelias thought that this would be an impossible feat, thus guaranteeing Jason's failure, and securing Pelias' claim to the thrown. 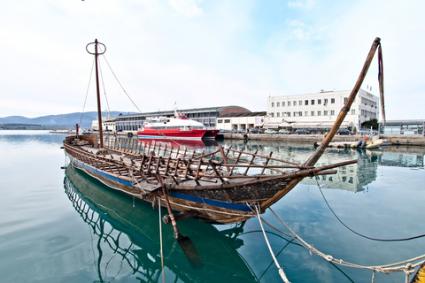 Jason acquired a ship called the Argo and assembled a crew of 50, known as the Argonauts. Jason and his men sailed from the Aegean Sea into the Sea of Marmara. Along the way, they encountered and defeated the Harpies, ugly winged females, who were tormenting the blind prophet Phineus. Phineus then helped Jason navigate the "clashing rocks," really strong currents in the Bosphorus at the entrance to the Black Sea.

Upon reaching the city of Colchis, Jason asked King Aeëtes to give him the Golden Fleece. King Aeëtes agrees to do so if Jason can complete a number of superhuman tasks, including yoking fire-breathing bulls, ploughing and sowing a field with dragons' teeth, and overcoming phantom warriors. At the same time, Aphrodite (the Goddess of Love) made King Aeëtes' daughter, Medea, fall in love with Jason. If he would agree to marry her, Medea offered to help Jason complete his tasks. With her help, he completes all the tasks, including snatching the heavily guarded Golden Fleece.

Jason returns to Iolkos with the Golden Fleece, however, Pelias still has no intention of giving up the thrown. Medea then kills Pelias. Stories differ, but the most popular version says that she tricked his daughters into believing that she could make him young again if they chopped Pelias up and put him in a pot.

Forced into exile by murdering the king, Medea and Jason go to Corinth, where Jason betrays Medea by marrying the daughter of the King of Corinth. Medea takes revenge by killing her own children fathered by Jason.

Jason once again became a wanderer and ultimately returned to the hull of his ship the Argo. The beam of a ship, made of a magical talking oak tree, falls on him and kills him, and thus ends the tale of this Greek hero.

Books with the Story of Jason

The story of Jason and the Golden Fleece has been told many times by numerous authors. Because it is such an important piece of literature and because so many other tales hinge on its elements and devices, it has been written and illustrated for children. Currently, the books listed below are in print and readily available. With s search of used book stores, you'll also find many other out-of-print volumes for children, which were written during the past fifty years.

The tale of Jason and the Golden Fleece is still relevant today. Elements of the story are reflected in literature throughout the western world. Tales of the great quest, of brave young men slaying dragons and other monsters, and fairy tales in which a heroine aids a hero in his quest play a prominent role in literature today. Whether the tale is read aloud by parents or teachers or is read by youth, it is a foundation piece of literature whose threads run through numerous pieces of literature throughout the ages.

0
Comments
© 2006-2020 LoveToKnow, Corp., except where otherwise noted. All Rights Reserved.
Resources, Advice & Tips for COVID-19
Read More
The Story of Jason and the Golden Fleece