"Jabberwocky" by Lewis Carroll is a famous nonsense poem that was written in the mid-1800s. In the work, an unnamed character becomes a hero by slaying the violent and dangerous Jabberwock, a fictional monster, with a sword. Although Carroll is best known for authoring Alice in Wonderland and its sequel, Through the Looking-Glass, of which "Jabberwocky" was originally part, the poem is his next most famous work.

"Jabberwocky" is unique in that it appeals almost equally to both children and adults. On a base level, it has much of what children enjoy most in poetry: rhyme, nonsense words, and a gripping plot. However, the depth of the poem and dozens of potential interpretations leave it with lingering value for adult readers and literary scholars as well.

"Jabberwocky" is just 28 lines long, and its story is rather simple. The narrator begins by describing the setting and surroundings, which seem tranquil and in order. In the next stanza, the narrator moves on to warn the hero about the Jabberwock, Jubjub bird, and Bandersnatch.

Following that, the hero goes in search of the Jabberwock, taking his vorpal sword along. He can't seem to find the monster, so he sits by a tree and rests for a time to contemplate his next move. However, before he can decide what to do, the Jabberwock finds him and attacks. The two fight, and the hero wins swiftly with an expert couple of jabs from the vorpal blade.

The poem wraps up with the hero heading home to the narrator, Jabberwock's head in hand. The narrator rejoices at the hero's triumph, and the two celebrate. The last stanza of the poem is the same as the first, repeating information about the tranquil setting. 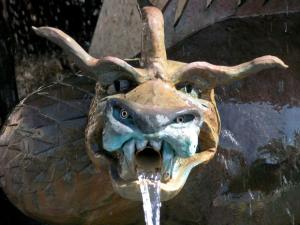 The Jabberwock has "jaws that bite."

Over the decades since "Jabberwocky" was first released, it's been translated into a variety of languages and become wildly popular. Other artists often take a crack at giving it a new interpretation; below are some of the best-known results.