Starting school can be a time of nervous excitement for children. The child may not know what to expect or be afraid of making new friends and learning all the rules. Whether your child is going to school for the first time or simply switching schools, reading books before the big day can help ease his mind and make the transition a little smoother.

I Am Too Absolutely Small for School 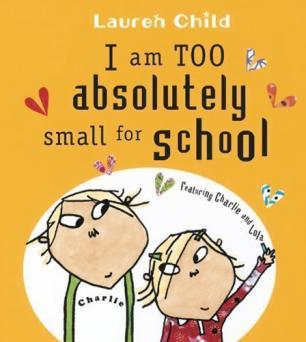 I Am Absolutely Too Small for School

I Am Too Absolutely Small for School by Lauren Child features siblings Charlie and Lola of the popular television show by the same name. This story focuses on younger sister Lola whose parents think she's almost big enough to go to school, but she insists she is "absolutely not BIG."

The School Library Journal (SLJ) lists this book as a good choice for first day of school books. SLJ mentioned the "refreshing" relationship between the siblings. Charlie and Lola get along well and he is a protective older brother.

This book is a good read for a child that is feeling a bit reluctant about the first day of school.

Sam and Gram and the First Day of School

Sam and Gram and the First Day of School by Dianne L. Blomberg, Ph.D. was put out by the American Psychological Association to help parents prepare children for entry into kindergarten.

The book is about a young boy named Sam who stays with his grandmother while his parents work. However, now it is time to start kindergarten, and he is scared. Everything is unfamiliar and big. As the first day of school goes on, he realized he isn't as frightened as he first thought.

Although there are no reviews on some of the more popular review sites, such as Kirkus or Publishers Weekly, the author does link to a review on Irene's Book Reviews. This review is pretty detailed about what is in the book and why parents will find it helpful for a child who is scared of starting school.

Franklin Goes to School features the popular animated turtle named Franklin. Paulette Bourgeois is the author and has written over 40 books for children. Many of Bourgeois' books have been turned into animated movies.

Franklin gets ready for his first day of school by getting a new pencil case ready. He packs his ruler, colored pencils and an eraser. He's excited and scared all at the same time. The book does a good job of describing how children feel before entering kindergarten.

A. Edwardsson, head of the Children's Department in Winnipeg reviewed this book and highly recommended it. She mentioned that the story moves along at a good pace and has a "reassuring conclusion." She recommends it for preschool through first grade.

Probably one of the most telling reviews comes from the Spaghetti Book Club, which is an organization that gathers reviews from students in classrooms across the country. Jesse, a second grader, states that he loves this book because of the illustrations.

Busing Brewster by Richard Michelson follows first-grader Brewster who is bused from an African American school to a mostly white school. The book is set in the 1970s and takes a snapshot at the tensions that arose during the beginning of school integration.

Kirkus Reviews points out that the illustrator, R.G. Roth, uses collages and mixed media to give the book a "modern-but-retro feel."

Publishers Weekly praised this book for giving the reader a "child's-eye view" of busing during the 1970s.

This is a good book to read to your first grader just before he starts school. It can provide a bit of perspective about the history of education in the United States. It is also a book that will lead to open and frank discussions about the different races a child might encounter in school and how to be a caring person to everyone.

First Graders from Mars is a series by Shana Corey with illustrations by Mark Teague. In Episode One: Horus's Horrible Day, the reader learns that

Horus is excited about starting first grade, but then he finds out there isn't going to be any of his favorite things, such as slime tables and snooze mats. He deals with a bully, gets put in the reading group he doesn't want to be in and feels homesick.

However, by the end of the book everything is well and the authors assure the reader that first grade will be a wonderful, exciting experience.

Kirkus Reviews says that this book has excellent "punny" humor that the cartoon-style illustrations enhance.

Any child starting first grade would enjoy reading this first book in the series.

The Night Before First Grade

The Night Before First Grade by Natasha Wing is about a young girl named Penny who is getting ready to start the first grade. Her best friend will be in the same classroom. The book's intent is to help ease the back-to-school jitters that children feel.

However, things don't go exactly as Penny planned. She learns that one is always making new friends and that sometimes the unexpected can turn out to be a good thing.

Wing also wrote The Night Before Kindergarten, which is an excellent choice for children preparing to enter school via a kindergarten classroom.

First Day Jitters is written by Julie Danneberg about a character named Sarah Jane Hartwell. Sarah Jane doesn't want to go to the first day of school because she is switching to a new school and terrified of the changes.

The reader follows Sarah Jane as she tells her father she doesn't want to go to school, she's scared, and she doesn't know anyone. However, at the very end of the book, the reader learns that Sarah Jane actually is not a new student, but is the new teacher.

The book shows children that everyone feels nervous when facing a new situation and opens up a dialogue for discussing how to overcoming nervousness.

The School Library Journal said that this book is humorous. Sarah Jane is partially hidden until the end, so the reader is unaware that she is an adult. The review states that children may find it reassuring that even teachers feel anxious.

Stuart Goes to School by Sarah Pennypacker is about third-grader Stuart. All children worry, but Stuart worries more than most. He worries his clothes are ugly and whether he'll have something to share during show-and-tell.

Unfortunately, every fear Stuart has seems to come true on his first day. The book follows Stuart during his first three days of school where everything that can go wrong does go wrong. However, Stuart soon comes to realize that there are worse things and his fears begin to ease.

This is a Parents' Choice book. The review on that site states that the story and illustrations work well together and are vivid and interesting. The book should "encourage" students embarking on their own first days.

The books above serve as a good starting point for what to read when preparing your child for the first day of school. Obviously there are dozens upon dozens of children's books available on this topic and more being released every year. After you've read these books, ask teachers, family, friends and your librarian what else they recommend.