Kids, ages three to five, will laugh as they watch a T-Rex attempt to fit in at a tea party. Author/Illustrator Molly Idle brings young readers a proper and delightful tale on how to show good manners at a tea party no matter who your guests are. While the narrator shares proper tea etiquette, the illustrations show all the troubles readers would expect with this giant guest. Tea Rex is a 40-page picture book featuring whimsical line drawings with a mature color palette. In 2014, the book won an SCBWAI Crystal Kite Award and Kirkus Reviews says "even dino fans with no use for a teapot will find themselves drawn" to this creative story.

How Do Dinosaurs ...? Series

Author Jane Yolen turns dinosaurs into children by throwing them in common childhood experiences in the How Do Dinosaurs ...? series. Written for younger readers, ages four to eight, each 40-page book features rhyming text, silly questions and lessons on social skills. The first book in the series, How Do Dinosaurs Say Goodnight? takes a unique look at bedtime routines for little kids and was an American Library Association (ALA) Notable Book winner in 2001. This story features human parents attempting to get their giant dinosaur children to bed. The dino "kids" put up a good fight with wacky antics, but they go to bed just like little kids usually do. The four other picture books from the series are:

Goldilocks and the Three Dinosaurs

You've heard the classic fairy tale of Goldilocks and the Three Bears, but what happens when those bears are dinosaurs instead? Author/Illustrator Mo Willems tackles that question in Goldilocks and the Three Dinosaurs. This devilish take on the fairy tale features a mother and father dinosaur with another dino friend visiting from out of town. As they clean the house, make pudding and leave home are they being naive or setting a trap? Readers will have to dive into this 40-page picture book to find the answer. Publisher's Weekly says this book for young readers "is a sure bet for audiences who have moved beyond more gently witty fare." This hilarious, fresh story won the honor of being an ALA Notable Children's Book in 2013 and is ideal for kids in grades one through three since they're more likely to get the secret plot.

The first book in the best selling Magic Treehouse series of chapter books is Dinosaurs Before Dark. When main characters Jack and Annie discover a time-traveling treehouse they are transported to prehistoric times where dinosaurs are very real. This unique dino tale mixes a fictional storyline with facts about dinosaurs to keep older readers engaged and learning which is why it's been named the number one selling chapter book series of all time. With a Lexile Measure of 240, this early chapter book is ideal for readers in grades one through four. 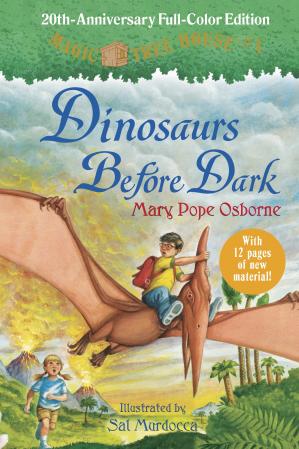 Older readers who love sci-fi and dinosaurs need to read Mad Scientist Academy The Dinosaur Disaster by Matthew McElligott. As the cast of young monster characters head back to school, they meet their new teacher, Dr. Cosmic, and their new class pet, a dinosaur named Oscar. This cooky teacher challenges the class to use their wits and smarts to make their way through a robotic dinosaur exhibit. When the dinosaurs accidentally come to life, the students have to save their whole school from these prehistoric beasts. This 40-page story written in comic book form has a Lexile Measure of GN390L and is a fun read for kids in grades three through five. If your young reader likes this Magic School Bus style story, there are two more books in the series: The Weather Disaster and The Space Disaster. Kirkus Reviews give the book a Kirkus Star and says "the mix of pithy banter, tumultuous field trips, and science fact is familiar and winning."

The history and current discoveries about earth's biggest animals bring these extinct creatures to life. Kids will not only experience the joy of learning with these nonfiction options, they'll also learn the joy of discovery.

Trusted natural history experts at National Geographic bring real dinosaurs to life for young readers in the Little Kids First Big Book of Dinosaurs. Featuring lifelike drawings and large text, this dino dictionary showcases a new dinosaur on each page with fun facts and age-appropriate information for kids ages four to eight. The 120-page book is broken into chapters based on dinosaur size, from small to gigantic, including over 50 specific dinos. With added features like pronunciation guides and suggested activities, it's no wonder Goodreads readers give this book 4.4 stars out of a possible 5. 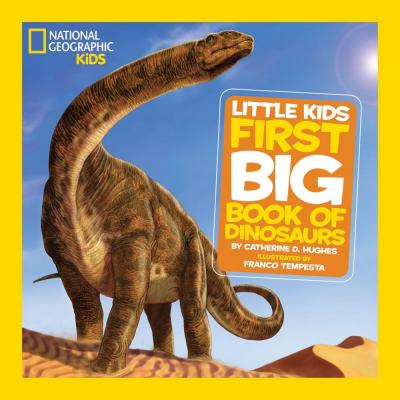 DK books teams up with the Smithsonian Institution to bring older readers a graphic look into prehistoric times. The computer-generated images look modern and realistic to engage readers at each page turn. You'll get an up-close and personal look at tons of dinosaurs and the world they lived in with maps, geological breakdowns and different angle images of dinos. Readers learn factual information about dinosaurs, bugs, fossils and Neanderthals in this comprehensive encyclopedia of prehistoric times. With more than 200 full-color pages, Dinosaur! is best for readers ages eight and older. Customers give this encyclopedia 4.4 out of 5 stars thanks to the "stunning visuals and many in-depth details" as customer Erin says.

Boy, Were We Wrong About Dinosaurs

Kathleen Kudlinski's Boy, Were We Wrong About Dinosaurs is an advanced 32-page picture book with a Lexile Measure of AD750L. This nonfiction look at the scientific process explores theories about dinosaurs throughout history and how modern discoveries helped dispel some of these theories. While the information presented takes some advanced thinking to fully comprehend, the entire book is written like a standard picture book making it a great option for kids of any age. Throughout the story, readers are "encouraged to question received knowledge" says Kirkus Reviews.

While the word "poop" engages younger and older kids alike, Jurassic Poop is written more for the older crowd in grades four and five. Author Jacob Berkowitz captures attention by teaching dino and other creature facts through a look at their poop. As the title suggests, the book is both funny and informational. Just like other fossils, dried and frozen poop from the age of the dinosaurs gives scientists information about the prehistoric world. This 40-page, full-color book has a Lexile Measure of 950L and won the 2007 Science Writing Award from the American Institute of Physics. 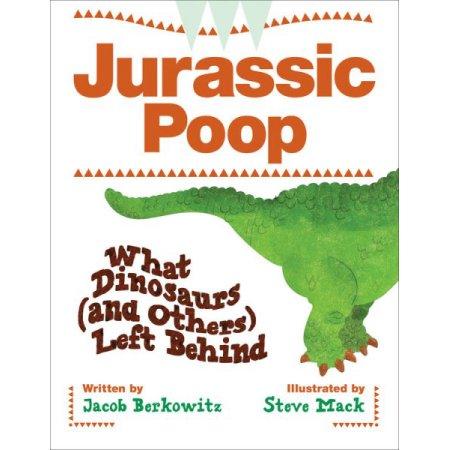 Jurassic Poop: What Dinosaurs (and Others) Left Behind

Time magazine offers this lively dino guide in their Time for Kids series. Dinosaurs 3D: An Incredible Journey Through Time includes two pairs of 3D glasses so readers can feel like they're walking with the dinosaurs as they learn about them. This 80-page book is great for readers ages eight an older because of the realistic images that may be startling for younger readers. Facts focus on lesser known information about each dinosaur and provide comparisons to animals kids see today. Reviewer Kimberly raves "the images are true to life" and "not cartoonish at all" which is the heart of what makes this a unique, fun read.

Take a Walk Through History

Books about dinosaurs help kids bridge the gap between reality and fantasy as they explore these unbelievably real creatures. If you've got a dino lover in your household, fill the bookshelves with these amazing books to keep their thirst for knowledge satisfied.