The Tale of Peter Rabbit is a children's book by Beatrix Potter that was originally published in 1902. Now, more than a century later, the book and its title character remain popular. In Potter's lifetime, Peter Rabbit and her other stories became so lucrative that she was able to write children's books full time and become financially independent, a situation that was almost unheard of for a woman in that time.

About The Tale of Peter Rabbit

Peter Rabbit is the only boy in a family of four children. His three sisters, Flopsy, Mopsy, and Cotton-tail, are generally more obedient than he is. One day while his sisters are out, Peter decides to sneak into Mr. McGregor's garden, which his mother has ordered all of her children to avoid. Peter's mischievous streak outweighs any fear he feels at going into the garden, even though Mr. McGregor captured his father in the distant past and ate him for dinner. Once in the garden, Peter has a feast of all of Mr. McGregor's vegetables and eats himself into a stupor. Peter is caught unaware, and Mr. McGregor appears and begins to chase him. During the resulting kerfuffle, Peter loses his jacket and shoes but manages to make it back to his mother just in time. 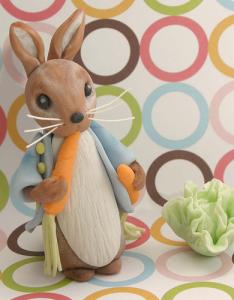 Beatrix Potter was born in 1866 and initially made her living by teaching English and doing work related to fungi and mycology. She received plenty of individual attention while growing up due to her family's financial situation and ability to hire several governesses to educate her. During her early adulthood, Potter wrote The Tale of Peter Rabbit. She shopped it around to several publishers, but it was ultimately rejected by all of them.

Undeterred, Potter self-published several hundred copies of the book and began distributing them herself. Some time later, the book caught the attention of publishers at Frederick Warne & Co., who offered Potter a publishing contract in 1902 and printed almost 30,000 copies of her story. During the rest of her career, Potter continued to write children's books, some more of which also featured Peter Rabbit. Her most popular titles include:

Although Beatrix Potter's books about Peter Rabbit and other animals are now seem dated, they're still very relevant to today's readers and resonate with parents as well as children. The stories are best suited for the picture-book crowd, young children who are learning to read or going through elementary school, but they hold a special place in many older readers' hearts and minds as well.